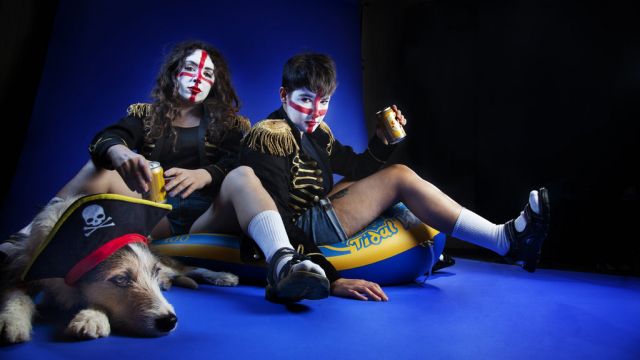 In 2018 Mothersole and Biscuit undertook a gig at Valetta’s expat bar, a dedicated shrine to legendary Oliver Reed, a man famous for embarrassing public displays, stellar acting and copious rum drinking. They loved the pub so much that the set is just that, and for those who enjoy a ‘tipple’, beer and rum are offered to all in the audience. It also frames the screen and live action perfectly.

It appears Malta, whose people won the George Cross for bravery in WW2, is not just ‘Jesus Disneyland’, as the duo describe it, but an immigration ‘bridge’ between Europe and Africa; easier to cross for the rich than the poor. What was to be a show became a quest to explore the corrupt European passport and immigration scam that was investigated by journalist and blogger Daphne Caruana Galizia. Her outspoken public shaming cost her the ritual slaughtering of her three dogs and ultimately, her own life, and it is the stories she uncovered that form the underlying truth and message of this show. The audience meets an array of sketched characters who, as the story unfolds, become more and more desperate and sinister. We discover that the media and politicians are the most terrifying. You may wonder why and also why I describe this show as ‘laugh out loud’ funny, but it is.

An impeccably tight and synchronised duo, Biscuit and Mothersole at times move, gesture, dance, talk and sing as one. Each sings beautifully and their acapella singing is worth the ticket alone. They are supported by slick and perfectly timed video, sound and effects. There is never a second when there is not something cleverly chosen to look at, listen to, laugh at or think about.

Makeup is dramatic, making a Maltese connection and de-personalising the actors whilst reinforcing the message.

Be warned. You will want to turn around and rebook. There is so much that you may enjoy the first time, but only really understand the significance and depth of the next time you see this show.