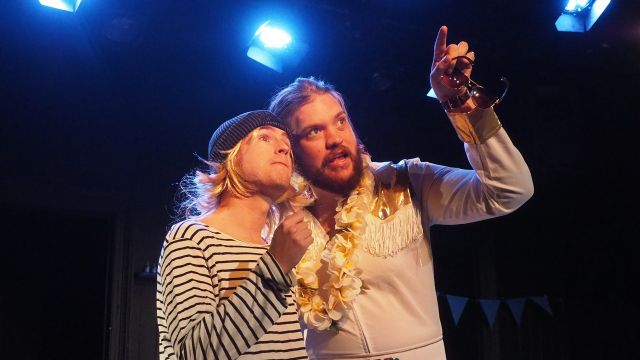 Sink, presented by Gavin Roach and Beyond the Yard, is a set in the bathroom at a series of costume parties, in the same share house, attended by the same group of people.

The plot pivots around the flamboyantly costumed Krispin (well played by Kade Power). In a series of non-linear scenes, we see a complex relationship between Krispin and housemate Benny (a solid performance by Liam Longley), who struggles with his emotions and identity. Things become more complicated when Benny hooks up with another housemate, Lissie (nice depth from Tallulah Starkie), and Krispin is attracted to Amy’s (Anna Linsteadt) boyfriend Caleb (Declan Brown). Brad Albert as Rocky, completes the cast.

Set and costume designer Bianca Roose has created a stage manager’s nightmare (poor Becca Jackson) with her effective but mess strewn bathroom set. The costumes, which are conspicuously ‘costumes’, are well chosen and help to define both characters and the time-line. Maddy Mullins lighting design is effective. 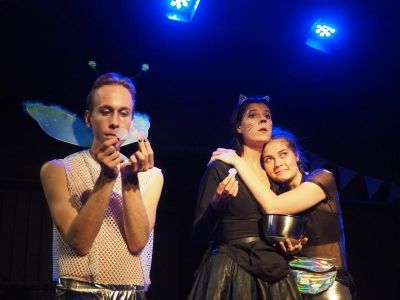 My biggest problem with Sink was that it was difficult to hear, and given that the story-line is complex, the actors (as would usually be appropriate in this intimate space) speak quite softly at times and a tendency for some delivery to be upstage, I felt the audience were just failing to connect. Eloise Carter’s sound design, though well-constructed, is simply too loud. The audience is needing to work hard to connect and jokes weren’t landing as well as they could - and the laughs are needed in this show which has some dark moments.

A coming of age play, of sorts, among the drug use and hook-ups the show has some interesting things to say about people’s perceptions and toxic masculinity.

With some tweaking after the first audience, I would expect stronger subsequent performances. With a full house on opening night, Sink looks set for a successful season.