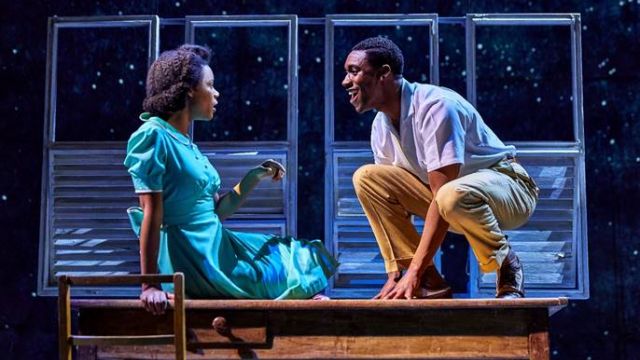 This is a sprawling but spritely adaptation of Andrea Levy’s multiple award-winning novel.  Beginning in the colony of Jamaica before WWII, it tells an epic story of Jamaican Hortense (Leah Harvey), Englishwoman Queenie (Aisling Loftus) and Jamaican Gilbert (Gershwyn Eustache Jnr), across a span of ten years.  Smart, pale-skinned little Hortense (Keira Chansa) is separated from her beloved grandmother and installed in the fundamentalist Christian, middle-class family of her uncle and status-obsessed aunt.  Intended to give Hortense a ‘better future’, this move comes close to ruining her with false expectations, turning her into a rigid, judgemental snob – and still the victim of a racism she doesn’t expect.

In Britain, on a farm and butchery in Lincolnshire, there’s teenage Queenie who longs to escape to London and the bright lights – and gets a chance when her Aunt Dorothy (Beatie Edney) offers her a job in her tobacconists and sweet shop.  Thus begins the trajectory of these two very different women, but neither will go where she expects or plans… Meanwhile, Gilbert, a realistic but ambitious man, wanting to become a lawyer, will serve in the RAF and after the war, board the now infamous Empire Windrush for a better future in Britain…  To say more would spoil this complex, multi-strand story, one that draws us into these characters’ lives - and says much about contemporary Britain as well as her past.

The long passage of time is handled with verve, pace and sustained emotion by director Rufus Norris and designer Katrina Lindsay.  Both Hortense and Queenie occasionally narrate at key moments, but the production uses the entire wide and deep Olivier Theatre stage – with revolve - brilliantly.  There are huge projections of archival footage (design by Jon Driscoll) of pre-war Jamaica, the stormy Atlantic, the Blitz, London street life and the Empire Windrush, packed with hopeful emigrants leaving the Caribbean.  The immersive sound is by Ian Dickinson and the sharply contrasting lighting by Paul Anderson.  Mr Norris also deploys his cast of forty (yes, forty - many playing multiple characters), as extras to create background action of such things as independence demonstrations in Jamaica and oblivious pedestrians in shabby, run-down post war London.

Music plays a large part here.  Composer Benjamin Kwasi Burrell combines ‘classical’ strings and Caribbean calypso and jazz rhythms – that latter having done so much to enliven and lift the spirits of the British from the 1940s onward.

As with any adaptation – and Helen Edmundson’s is skilful and the result of close collaboration with Andrea Levy – the ‘author’s voice’ disappears and we are left with her characters and events.  But here the well-chosen key events, each always a development in the three stories, are rendered with crisp economy and we move from one to the next so smoothly that narrative drive is maintained throughout.  The characters are made whole by some wonderful performances.  Ms Harvey’s Hortense, so irritable and peremptory, is heartbreaking, especially when we know what she was as a little girl who fell in love with her charismatic cousin Michael (CJ Beckford).  Mr Eustache’s Gilbert is endearing in his kindness, resilience and good humour, but when he finally explodes at the virulent prejudice all around him and Hortense, he becomes the moral centre of the tale.  Andrew Rothney is disturbing as the repressed, emotionally inept and congenitally racist Bernard whom Queenie reluctantly marries.  There is some shocking racist language here – or it would be shocking if we weren’t still hearing it.  Ms Aisling herself is a beautiful casting choice as Queenie: warm, wryly funny and exactly right as the 1940s idea of sexy, a woman with whom every man falls in love.  Her monologue on her discovery of sex is unforgettable.

Small Island (that’s Jamaica and Britain) tells a story that has become even more timely in the context of the so-called ‘Windrush scandal’.  In 2014, the British government’s Theresa May and Amber Rudd brought in the Immigration Act.  Its ‘hostile environment policy’ was designed to deport certain immigrants many of whom had been in the UK since the 1940s – including those who had arrived in 1948 under the British Nationality Act on the Empire Windrush.  People from the Caribbean were invited to Britain to rebuild the war-shattered country, believing they were British citizens (and legally they were), only to find the harshest racism and exclusion from jobs, services and accommodation.  But all that, while true, does not make of Small Island a dogged piece of agit-prop outrage.  It is that by implication, but it is first an enthralling and moving human story that ends with revelation and stubborn hope.