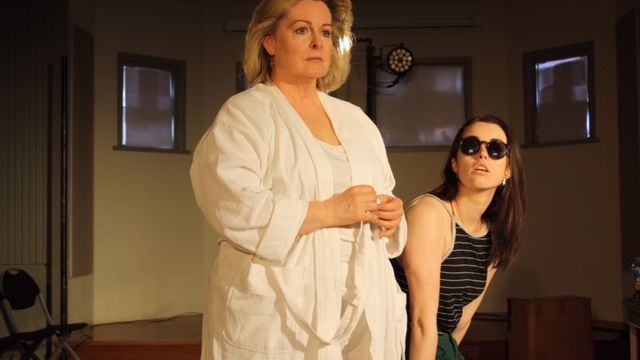 It’s a sweltering Aussie family Christmas Day, or so it seems, as two generations of women, mother and daughter, escape to the coolest room in the house, the bathroom. A third generation, the grandmother, though recently deceased, is omnipresent.

This short debut play by Liz Hobart lays bare the complex relationships between the three women.

The truthful dynamic between the mother, Fiona, and daughter, Imogen, played so affectingly by Anna Lee and Annie Stafford, is palpabe in this drama, heightened by being played out in real time in a single space.

I’ll avoid spoilers here, as I wouldn’t want to rob you of the impact on entry into the intimate space, nor foreshadow too much of the play’s action.

With a short season, it’s no surprise that the lighting isn’t complex, and that the set is nothing more than the dominant central bath, an exercise bike and a vanity. Unsurprisingly though, this feels like a bonus, as we focus in on two terrific, strongly interconnected performances.

The rhythms of director Jordan Shea’s sensitively paced production invite us inside the dissonance of a family relationship which may well resonate for many in the audience. Surrounding the action as we did in this small space, the fringe brevity and economy of the script felt just about perfect, given the intensity and emotional intimacy of the experience.