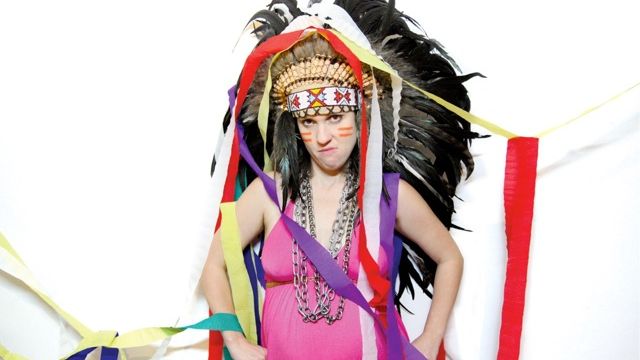 On the poster for Special, a woman in an American Indian headdress scowls at the camera, her pregnant belly prominent underneath a bright pink halter neck dress. Before I saw the show, I studied this image and the accompanying director’s notes to get a sense of the story. There are scant details in the notes, but I at least knew it was going to be about a very pregnant girl, Special, and her mother, Goldie, both of whom are trapped in an isolated place. I looked over the set, with its curious dusty mountain rising to the ceiling on one side, and an exercise bike placed towards the back of stage left, and was intrigued and eager to find out more. While I did get to see the mysterious Goldie (Liz Jones) and her daughter Special (Mary Helen Sassman), the play simply failed to tell me anything about their relationship or give me reason to care what happened. The major fault with this play is that it doesn’t tell a story. The characters are undeveloped, giving the two obviously talented actresses very little to work with. Sassman (who is genuinely pregnant in this play) is expressive and beautiful as Special. She looks like a goddess in her magnificent headdress and I wished she’d been given more chance to sing, as she clearly has a spectacular voice. Jones is by turns funny, compelling and fearless as Goldie, but none of this compensates for the lack of a solid script and structure for the play. Some of the scenes in which the women act out rituals are terrific to watch, but amount to nothing. Delving back into the director’s notes, I saw that the production team worked incredibly hard “to put together a huge mountain of a show”. If Special is a mountain, it’s a very foggy, obscured one indeed.