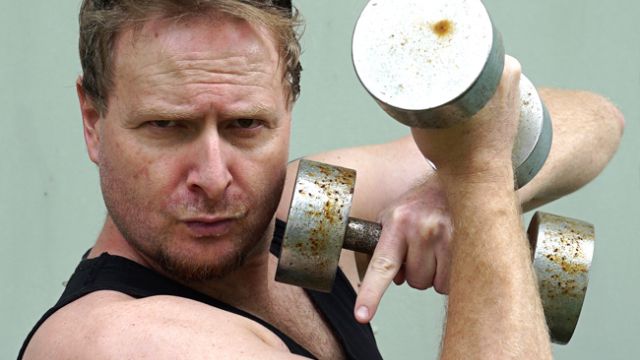 It is a testament to the professionalism of actor/writer Michael Sams that he managed to overcome enormous odds to perform four different pieces in this self-written presentation.

On the night I saw this production - in a specially created tent for theatrical performance - not only did he battle constantly with an annoying head microphone which kept slipping off, but he – and the audience – were subjected to two conflicting blaring sets of loudspeakers from other areas of the arts festival. This was extremely infuriating, and should have been taken into account by festival organisers when setting sound levels, as it represented a singular lack of consideration for the performer – never mind the audience who had to endure it. I daresay that this was the reason the actor was amplified, which in normal circumstances would have been neither necessary nor appropriate.

This being said, actor Michael Sams valiantly ploughed on in true “show must go on” fashion.

I am always hugely admiring of actors who combine performing and writing skills – a combination which is not always easy. It requires enormous understanding not only of the craft of acting, but also of creating the raw material from which a character is created. The challenge very often is recognising where the lines between each craft blur or blend.

The four monologues written and performed by Sams were presented under a title of the Ideas Conference 2019, and the program proclaimed that you would “hear speakers addressing issues relevant to men of the modern milieu.” I found this premise to theme the four divergent monologues somewhat tenuous as I found myself battling to find a thread that drew them together.

We began with a pseudo-American evangelist (Phil Smythe Jr. Jr.), a martini-swigging sexologist (Prof Xavier Zinc), an Australian fitness “guru” (Shawn Brawn) and an effete actor (Mr Flair). Presenting four differing characters represents such a golden opportunity for an actor, and Sams took full advantage of thus with comparatively little help. Each character was delineated by changes of accent, simple changes of costume (different jackets over basic black), and he imbued each four characters with differing and interesting characterisations with varying levels of success.

These characterisations clearly demonstrated Sams’ outstanding abilities as an actor, and the essence of something really interesting was definitely there. What it required in my view was perhaps a different approach to the writing which would have projected the performance (and the audience) into the next level. Perhaps more clarity of intention would have been the order of day, finding a sense of what each character trying to say about a selected theme which addresses an issue relevant to men – as promised in the programme notes.

This is a difficult premise, but as an audience member, we needed to be taken on a journey with each character during each 10-15 minute monologue. We needed to “read” the character’s individual journey within a very short space of time, and we also needed to find some access point to identify with each character and his vulnerability. There was one notable exception (Shawn Brawn), which demonstrated to me where Sams should direct his efforts in further developing this work.

In short, an admirable performance - despite great odds - which would benefit from further exploration and development in the creation of the characters’ individual narratives.