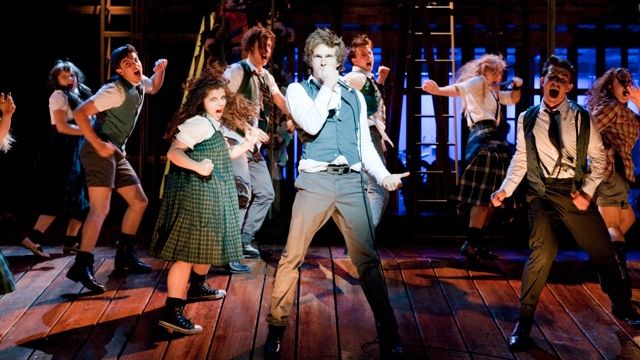 Franz Wedekind’s controversial expressionist drama Spring Awakening explored these themes in 1891 and was branded pornography. The full-on sex scene which ends act one of this new version may well spark a similar response in certain quarters even now.

The program notes for this new musical interpretation describe it as being about ‘teen yearning and adult repression.’ I needn’t bother inventing an alternate description. Adapted to the musical theatre stage, Spring Awakening is an exuberant, sexy Tony award winning musical.

Spring Awakening has picked up on a rich vein of musical theatre that’s largely been dormant since Rent. Like Rent it takes a classic story and gives it a young rock music voice. By retaining the structure of the original Wedekind play, it’s rather more coherent than Rent.

If initially there seems to be a division between the 1891 dramatic narrative and the rock score, you quickly accept it as the contemporary musical inner voice for the play’s adolescents, highlighting the universality of Wedekind’s themes.

The result for me is a moving, powerful musical theatre experience, with an essentially driving rock score, also featuring passages of calmer beauty.

There’s a conscious theatricality in the staging conventions that’s very contemporary and theatrical  - hand held lighting and microphones for instance, and time/ style blended choices in costume and hair. Yet no matter how theatrical the conventions, the adolescent performances are focused and full of belief.

The on-stage chorus role of the ensemble crosses effectively between musical theatre and Greek commentary.

Two actors play the all the adult roles, representing educational authority figures and the ‘parentocracy.’ There’s certainly stereotyping across those portrayals, but it’s wickedly appropriate.

The choreography is vibrant, high octane and in-your-face, with the whole evening is delivered in celebratory style by a fresh, energized, appealing young Australian ensemble cast.