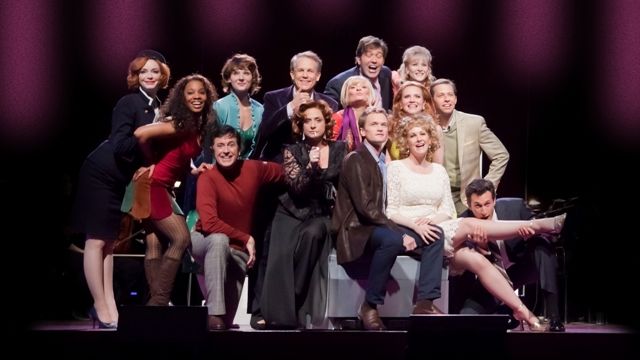 Confession number one: I am a music theatre tragic.

Confession number two: Company is in my top three musicals of all time.

You can possibly understand, then, why I salivated throughout the 50km drive to the charming Athenaeum Cinema in Sorrento, Vic.

Lonny Price, who directed both the Lincoln Centre production and the film, gives us a concert version of Stephen Sondheim’s 1970 multiple award winning musical, with a cast to drool over (after you stop salivating, the drooling follows.)

Neil Patrick Harris, Patti Lupone, Stephen Colbert, Jon Cryer, Christina Hendricks and Martha Plimpton lead a cast of Broadway stars, the like of which we probably won’t ever see again.

The story revolves around the 35th birthday of commitment phobe Robert (Bobby), the five couples who are his best friends, and the three women to whom he can’t commit.

Neil Patrick Harris shows how and why Doogie Howser MD became a Broadway star, whilst still commanding television in “How I met your Mother.” There are moments when he looks disinterested in the action and the camera catches him off guard – but he’s a delight in “Marry Me A Little” and “Side By Side” and genuinely moving in “Being Alive”, perhaps the ultimate love song.

His is not the show stopping performance though, despite his strengths. Katie Fineran as Amy is sensational, and it’s the first time I have ever heard every single syllable of “I’m Not Getting Married.” She’s endearing and scatty and warmly neurotic without being annoying as some other Amys I have seen have tended to be. The incomparable Patti Lupone allows the younger performers their moments of glory before hitting us full force with “Ladies who Lunch” and what a meal she makes of it. Though no-one can replace for me Elaine Stritch in the same role, Lupone shows why she is a legend, the voice is impeccable, she milks every nuance and caresses every note. You’re watching a star do what she was born to do.

John Cryer and Stephen Colbert show they are not simply television comic actors. Colbert holds his own musically and Cryer’s is a genuinely subtle performance full of subtext.

Christina Hendricks, looking positively chubby alongside Broadway waifs, is all woman and gives us her best Marilyn Monroe performance as April. She shows a surprising vulnerability that isn’t obvious in her MadMen role. The three girlfriends number “You could Drive a Person Crazy” is definitely a highlight. Then there’s Martha Plimpton, such a fine dramatic film actress, mixing it with the best that Broadway has to offer as Sarah.

The New York Philharmonic, under the direction of Paul Gemignani sounds sensational and never intrudes on the performers working in a suprisingly narrow downstage area.

Company seems a little dated in places because it’s not far enough in our past to be history, and the performance level is uneven, some for the cameras, some for the audience, but none of that matters. Just suspend disbelief and go with the flow. George Furth’s book is both funny and truthful. His clever insight on marriage in all its forms makes us laugh and cry at the same time. But the real star, as always, is Sondheim. And though perhaps better known for his darker, deeper shows like Sweeney Todd and Into The Woods, he gives us, in Company, the joy of being alive and of loving with all its pain and its magic. The show is a celebration of life, and of love.

So tomorrow morning, get up early and have a yummy breakfast….Juice and coffee and eggs Benedict…and then take your loved one to see true magic on screen. You won’t stop smiling for the whole week to come….and if you miss this, your only chance… you deserve Mondayitis.