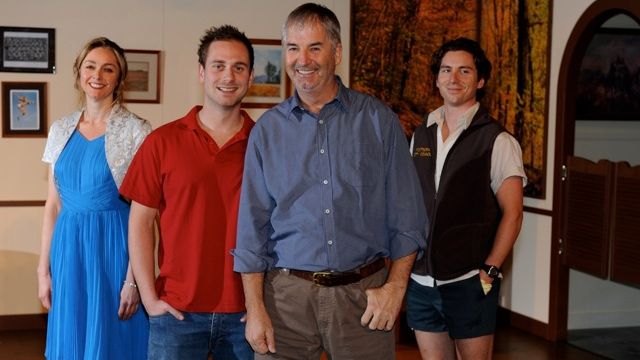 It is a little presumptuous of HIT to advertise this production of The Sum of Us as the “Australian Stage Premiere”, considering that it has been staged – and staged well – by community theatre groups ever since the rights became available. Nevertheless, this is a very contained production.

Shaun Gurton’s realistic set is fittingly detailed, despite the fact that it is a touring production. The  ‘feature wall’ dominates but is not overly intrusive. The movement of the sofa and table is a little irritating, but does fill the scene breaks. The lighting  (Richard Vabre, designer) is excellent – as long as cues are met – and they weren’t a couple of times. Pity, as it was noticeable! The music – composed by Andrew Pendlebury – sort of permeates the consciousness and becomes almost part of the set and the action.

The play itself – almost by now a clichéd summary of gay ‘coming out’ stories – is still pertinent and at times, poignant. Patrick Harvey (Jeff) and Glenn van Oosterom (Greg) handle the ‘boy meets boy’ scenes with beautiful, hesitant sensitivity and humorous self consciousness. These characters are believably naïve and, in their different ways, emotionally tortured: Greg by his inability to ‘come out’ to his parents and Jeff by his thwarted need to find lasting love. The script, and the sensitive direction by Denis Moore, lead these two actors to a stage truth that is heart warming. 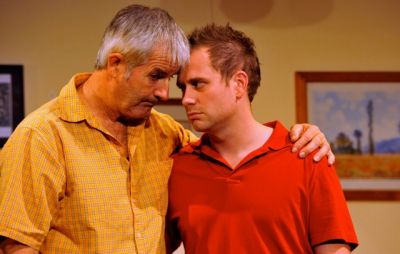 Replacing Steve Bisley in this part of the tour, John Jarratt plays Jeff’s understanding father, Harry.  Jarratt brings his characteristic ‘blokey –ness’ to the role. He is drops the ends of words. He sniffs. He rubs his nose. His delivery is broken into unusual rhythms. It does work – but is a bit annoying , especially in his long monologues.

However, he plays the Harry that is in the script. A typical Aussie ‘bloke’, who has had to deal with the untimely death of his beloved wife and the realisation that his son is gay. The relationship established between father and son is just right, especially in the first act. They send each other up mercilessly, interspersed with little punches on the arm from Harry, and slaps on the bottom from Jeff. It is easy to believe that this is a happy, accepting relationship. They are funny and caring and credible.

The comedy of the scene when Harry interrupts the boys’ first tentative first kiss breaks the feeling of voyeurism for the audience, and is a gentle lead in to Greg’s embarrassed inability to deal with openness and Jeff’s inevitable disappointment.

The second act is less compelling. The introduction of Harry’s relationship with Joyce, Nell Feeney, leads to some ‘clunky’, unrealistic moments. Though Feeney is suitably hesitant and embarrassed, it is not as well written as the rest of the play. It does lead to Harry’s admission that he did find it hard to accept Jeff’s homosexuality, but this could have occurred in the first act and avoided yet another wordy monologue.

The anticlimax – after a long costume change – is sad and poignant, but too long. It dragged, and the audience felt it.

This production is engaging and sensitive. Any fault really lies in the wordiness of the script itself.

Images: Top - The Cast, Lower - John Jarratt and Patrick Harvey in The Sum of Us.