The Swimming Club by Hannie Rayson 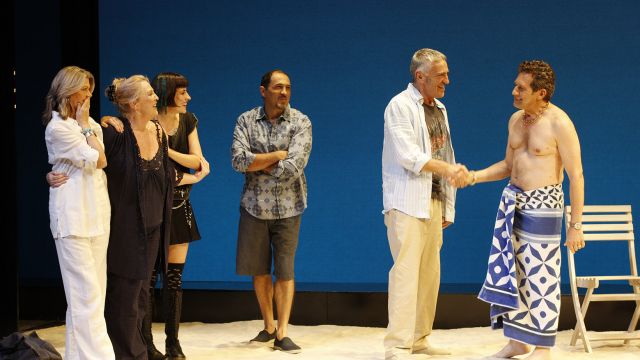 A fast paced and lively offering, The Swimming Club is smattered with many humorous and poignant lines delivered by actors with the competency and energy to whisk their characters swiftly from youth to middle age and back again and again. In part a reflection on and comparison between places, eras and times of life, this work identifies some of what is lost and what is gained in the process of living. It also stands as a reminder that we can be thankful we no longer suffer the social mores of the early eighties.

The minimalist set, an expansive beach, is stunning in its simplicity. It suggests distance, timelessness and perhaps the infinitesimal smallness of our petty concerns. This staging, in its vastness, offers little in the way of a buffer for the predominantly naturalistic performances. However it does allow for dramatic play with light and colour, the creation of an intoxicatingly beautiful silhouette and the surrealist staging of significant moments. Despite some clunky changes at times, Matt Smith’s lighting design contains a number of beautiful components.

The cast is uniformly strong. As the bold, resilient and sometimes brazen Bird, Caroline Gillmer is convincing and endearing. In the second half as Dave Flinders, John Waters movingly conveys the bafflement experienced by a man in flux after his life is sharply transformed by unfortunate circumstances. As Dave’s wife Kate the Anthropologist, Angela Punch-McGregor delicately embodies this bright and astute central character.

One senses that director Kate Cherry has delighted in nurturing. The whole is imbued with the spirit of generosity and support in a milieu of the organic that signifies significant growth and enrichment over the coming weeks.

Theatre polarises. There are those who revel in watching characters very like themselves or those close to them elicited, elucidated and explored in the hope of better understanding, gaining some elusive insight, or just being affirmed. Then there are those who, fearing ‘death by embarrassment,’ squirm and flee from the very thought of being thus exposed in a shared public space. For those interested in fossicking around in thoughts and ideas of what it means to be middle class and in the middle of one's life The Swimming Club is a lively, insightful and at times very funny indulgence containing some beautifully crafted and voiced insights.