Tales of an Urban Indian 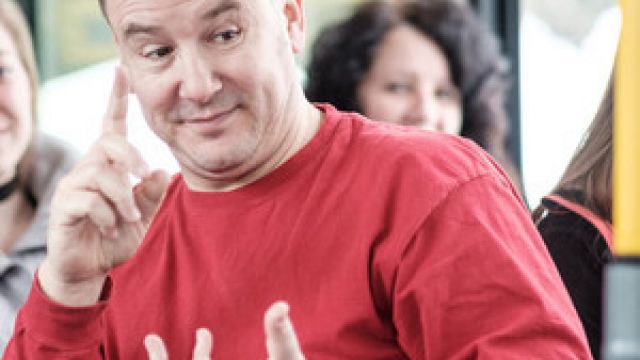 In Tales of an Urban Indian 35-year-old Canadian indigenous actor, Brendan Chandler ‘becomes’ Simon Douglas, growing up on two different reserves. This piece of non-traditional theatre is compelling, all embracing, challenging and uplifting. The 90-minute, one-man narrative, like his earlier performance piece, How Did You Find Me Here? is the journey of a young man coming to understand his Indian heritage and its impact on his life. We journey with him, literally, as he traverses his world of hopelessness, drugs, alcohol and desperation to discover and embrace who, rather than what he really is.

Canadian company Talk Is Free Theatre (TIFT) has presented two challenging performances at this year’s Fringe. Their work is modern, edgy and features a strong moral and social compass that points the audience to examine their own beliefs and well-held views.

The use of non-traditional venues is repeatedly used to symbolize key elements or contextualize the tale they tell. In this performance, directed by Herbie Barnes, riding a bus is about sharing the notion of life journey, poignantly stopping strategically at parks and a cemetery, with the bus door opening and shutting as people leave his life, sometimes in the wake of devastation, occasionally leaving the gift of hope.

If there is only one show you should see in this jam-packed Fringe this is the show. Chandler radiates energy and passion from the second he boards the bus. This is a masterclass in how to sustain and personalize a beautifully written script so that it captivates, entertains and presents a universal message about the plight of and challenges for indigenous people, worldwide. It is not sympathy seeking; it is, rather more, a tale of hope.  Simon tells it as it was for him growing up, graphically enacting teenage sexual fumblings, a horrific car crash, and the deaths of precious people in his life.

We live through Simon’s mother’s attempts to save him from the common destiny proclaimed for indigenous men, his momentary fame when to be Indian was ‘fashionable’, then his ultimate substance abuse battle that leads him to the realization that ‘chance is the only thing that you never lose.’

Chandler’s pace is impeccable, his performance never faltering as he moves up and down through the bus, inhabiting the persona and voices of people who have shaped or left a mark on his life; he switches between more than 20 characters (I lost count). His presence is athletic, believable, beautifully enunciated and humbling.

He held us in his hand, all of us seeking a new beginning for this fictional man whose pledge was to the next generations.

Chandler alighted from the bus and left me feeling that I would like to know more. Such is the power of a great piece of theatre presented by a superlative performer.