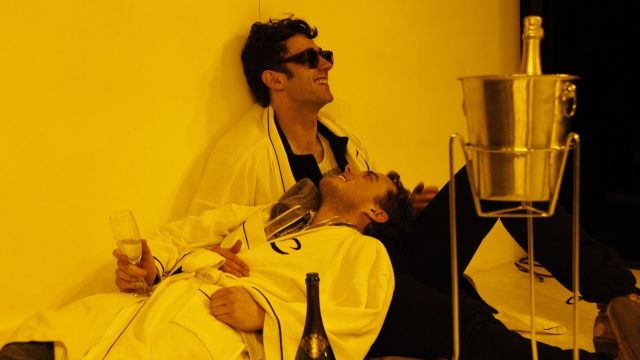 How do we explain, understand and live with the acts of humans’ inhumanity to others, and our unceasing ability to commit atrocities, create fear, inflict pain, denigrate and dehumanise others?

We create myths, we attribute labels to the perpetrators, and we see and think of these acts and their agents as aberrations. We ask ourselves and others, “How could they do this?”

Thyestes shares ‘the moments between atrocities” and shows us that it isn’t a matter of them, but us. It is a part of how we as humans are.

The stage is a white box with open sides; the audience is split, facing itself on either side. Even the setting says; this is you! This is what you are capable of. It isn’t gods or monsters that do these things, but people like the ones around you and looking at you.

The story of Thyestes begins with a killing and ends with a killing and in between the characters laugh, joke, play, eat, drink, love, cry, dance, argue, terrify, seduce, abuse and talk or don’t. The performers, Thomas Henning, Chris Ryan and Toby Schmitz, are superb. The naturalism of the dialogue and action is so believable that it is as if they are these people and this is happening now. The responses feel genuine, not rehearsed, as if this is the first time they have experienced or heard the previous line. The opening scene, for example, felt as if it was unscripted and as if you were eavesdropping on a conversation you might hear as you are drinking a coffee. This is acting of the highest level, to make it appear so natural, so real, that the audience feels like voyeurs. The setting may be today, but there are many links in terms of the structure that maintain the play’s origins. There are only three male actors on the stage playing all the male and female roles. Most of the violence happens off stage but what does take place on stage is confronting and terrifying in line with the “no holds barred” approach of the theatre of ancient Rome. The role of the chorus is performed by the electronic ticket text, which informs the watchers,where the action is taking place and the event that has happened in the intervening time.

The structure of the play is linked to the impulses and events that motivate Atreus’s obsession with revenge. The second part jumps forward in time to the death of Atreus and then for us to understand why he dies, the play propels us backwards at high speed to witness the shocking dinner where the greatest taboo we have as humans is broken.

The scenes change rapidly and as if by magic a grand piano appears, a table is set, a table tennis table is centre stage; no crew are ever visible, think television and cinema without the screen. The music used in the play ranges through a wide range of genres and brings moments of introspection, drama and explanation. The technicalities of this performance are, like the acting, seamless and of the highest level.

This is a performance that takes time to digest. It is a production that I will be talking about and remembering for many years. Go and see it while you can.