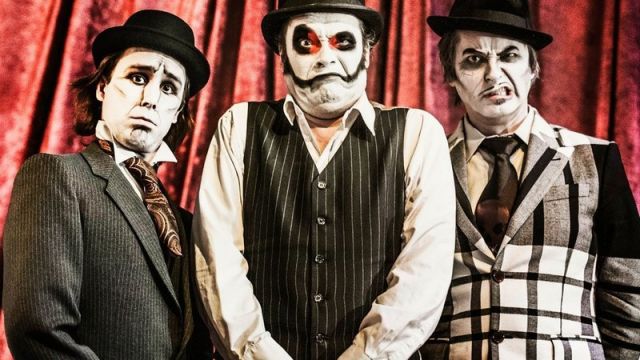 According to Martyn Jacques, Edgar Allan Poe is the most published poet in the world. The Tiger Lillies present Edgar Allan Poe’s Haunted Palace explores Poe’s world, his works, his private life and tragic demise.

There are so many incredible areas of this performance, particularly visually. Against a plain set of drapes, doors and elevated platforms, animations are projected. We are taken from streets that fold in on each other, to flowers blooming, a dragon slithering around and a giant beating heart, among many other projections.

The Tiger Lillies transport us to a Brechtian world with just a touch of punk. The instruments played by the 3 musicians range from piano, percussion, piano accordion and bass to a musical saw and the little heard theremin made famous in the soundtrack of the film ‘The Day the Earth Stood Still’. The effect ranges from eerie, reminiscent of German cabaret to brash, strident and in your face.

The three musicians are masters of their craft. The vocals by Martyn Jacques, also the narrator, run the gamut of emotion. With a voice of amazing range, he knows how to work the audience from disgust to pity. He is ably assisted by Adrian Stout on bass, guitar, saw and theremin and Jonas Golland on percussion.

Peter Caulfield’s Poe develops from a man unsure of his talent and easily led, to a broken shell of a human being with seemingly nowhere to go but death. He is riveting to watch.

Lastly, Lucy Patrick gives us an assistant uncannily like a female Igor, Dr Frankenstein’s assistant. She creates a character who, with a diet of boiled babies, is repulsive but compelling. She also plays a number of other roles.

The choice of black and white stylised makeup and distressed formal clothing further accentuates the Germanic cabaret feel of the whole production.

Edgar Allan Poe’s Haunted Palace is an experience not easily forgotten. It is confronting, haunting, compulsive and a feast for the eyes and ears. It will live in your memory long after you leave the theatre.