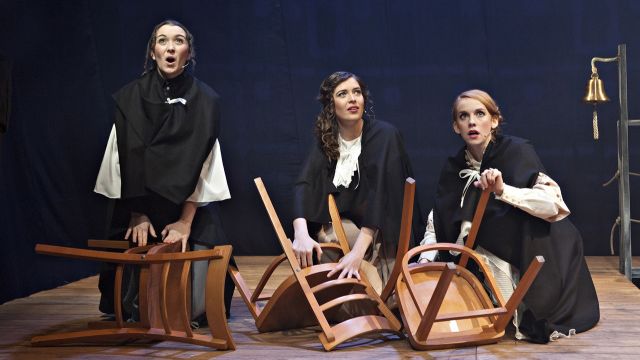 “Charming” is an odd word to use about a show which tells of the death of more than 1,000 people, but charming is the first word that comes to mind with Titanic. Maury Yeston’s lovely score (albeit a little repetitive) is poignant and evocative, and Peter Stone’s book quite brilliantly establishes 60 unique and very different characters in just a few vignettes each, creating people we actually care for. It’s also often witty and clever, providing much needed chuckles to break the tension of what is to come.

But it is the production itself (and all thanks to the producers and the remarkable work of director James Cutler) that touches us with its humanity and reduces many of the audience to tears.

Cutler has clearly had a singular vision which all of the creatives involved have been inspired to follow. The result is that rarest of creatures, a production that understands exactly what it is and where it’s going, with everyone involved committed to taking the same journey together (including the audience) thus making it a very special experience. Cutler’s work on Parade in 2014 and In The Heights last year demonstrated his skills in directing large ensemble casts, but in Titanic he has raised the bar yet again to find the emotional level in the storytelling without it ever being cloying. He is largely responsible for the success of the production

The mood is set before you even enter the theatre. The foyer is dressed as an old fashioned wharf with trunks and suitcases (someone did a stellar job of sourcing these from op-shops or landfills) and signs direct you to the boarding area while a lone violinist (Navin Gulavita) plaintively evokes memories of the “Belle Epoque”. You enter the ‘Chapel’ through the long corridor filled with luggage also waiting to be loaded, to the lilting sounds of a string quartet (partially sunken in a pit in the middle of the raised and raked stage.

This clever pre-show setting of time and place brings atmosphere to the theatre before the lights are even dimmed, and Kent Ross’ Musical Direction is of the highest order – with keyboards and drum hidden to create the illusion that the string quartet is part of the fabric of life aboard the great liner.

The cast is exemplary and it seems churlish not to mention all twenty; the voices and harmonies are terrific, and individual acting is always on point. This is an ensemble par excellence, with no weak links anywhere. An added bonus is that diction is impeccable in all cases. It’s possibly the only time in my memory I have seen a show of which I heard every single word, and it was quite marvellous. There are, however, moments for individuals to shine. Special mention to all of the following:  Joel Granger as Harold Bride, the radio operator - I saw him just months ago when he shone in another production, but he has made another quantum leap – just marvellous work; David Irvine for the brute strength of his Barrett, the stoker, coupled with beautiful singing and sublimated sensitivity; Barry Mitchell and Amanda Stevenson as The Strausses - their moving 11o’clock song ‘Still’ was the emotional highlight of the show; Christopher Southall (Etches) has great command of the stage, and talent in spades (as he proved in Godspell earlier this year); Sam Bennett (Jim Farrell) and Rosabelle Elliott (Kate McGowan) are both super talented and just delightful as the young lovers. Don Winsor (Andrews – he has played the role before in the USA) brings his vast experience and charisma to the cast, and Casey Withoos is a comic delight as Alice Beane.

So cleverly is the raked stage designed, and so excellent Cutler’s direction, that many of the audience felt the stage was moving and the rake increasing as the ship sank, and passengers and crew lost their footing and stumbled and fell. The abstract nature of the design allowed a few wooden chairs to be the only props needed … everything else was mimed – and wisely so – it would have been chaos to manage a large amount of props, with actors changing characters within just a few seconds. The drowning scene was particularly moving and I have never heard such silence in a theatre. We were mesmerised. While the line etching graphic projection of the boat worked fine, I can’t help thinking it was a missed opportunity. There are so many photos of the inside of the Titanic that are no longer copyright, and it would have been marvellous to see slides of the first class dining room contrasted with, say, the third class dining room in those scenes. But that’s a minor observation, not a criticism.

Titanic might not be a favourite for the younger generation, but there are dozens of shows geared to them. Here is a show that is for all audiences, especially those who have become disillusioned with musical theatre. So if you have a wife, mother, grandmother or you simply love beautiful music, this show will move and delight you. The fact that this is the first professional production of this multi award winning  show in Melbourne adds weight to how much we need a company like StageArt to boldly push the envelope (and themselves) with each new production. And James Cutler…thank you.