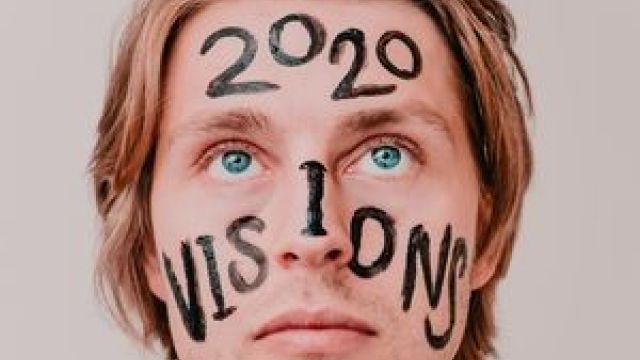 Adelaide Fringe. The Boardroom at The Griffins Hotel, Adelaide. 7-14 March 2020

Ten years on from losing his sight British comedian Tom Skelton looks back at the last ten years and indulges us in his ‘what if?’ moments, starting his show exactly at twenty past eight – 20:20.

He takes us on his journey from the first medical specialist’s appointment where he was told he would soon have only 5% vision, through each year of the 2010s, introduced by music and audio from that year.

Skelton tells us about the realities of his challenges in working out which is the men’s toilet and how to make a cup of coffee without spillage, but also his alternative realities: where he’s a spy sent to Russia, an Olympic gold medallist and a saviour of climate change. He tackles Brexit, PayWave and Tinder with meticulous detail and the clearest diction. Skelton’s English accent is just right for his self-deprecation and endless optimism, even when he’s having a terrible time.

Skelton is a brilliant storyteller, inhabiting the other characters in his stories as much as his own persona-and he is hugely funny with it. He’s inventive with his use (and re-use) of minimal props and isn’t afraid to interact with his audience, involving them to act his part in a scenario and reacting with his sharp humour to us laughing.

As much as he improvises with his material – there’s a perfect inclusion of the noisy Fringe event adjacent to his – Skelton has a cleverly constructed narrative here that not only makes us laugh the entire time, but needs to show us the darker undertones (that still make us laugh!). It’s as much about his inherited condition as how others react to his visual impairment, particularly when he doesn’t fit the stereotype of what one should look like.

Skelton is hilarious and humble. His light-hearted take on what he’s achieved in the last ten years will make you laugh - and think.