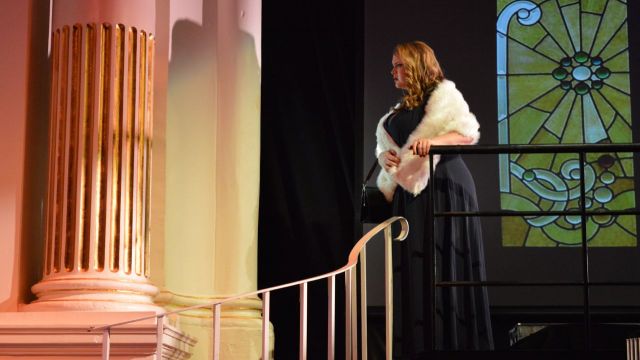 Anna-Louise Cole’s beautiful soprano voice brings vibrant anguish to this cunningly staged production of Puccini’s story about love, jealousy, gloating lust and violent retribution. The theatre resonates with the carefully controlled notes that ring of her obvious passion for her art and her wide training and experience. From her very first aria, where jealousy fights against love and devotion, to the desolate grief of the finale, Cole gives a thrilling performance.

Her lover, the cavalier Cavaradossi, is played by tenor, Martin Buckingham, whose rich rendition of the very first aria, Recondita armonia, and his first duet with Cole, left the audience assured that this was to be a stirring production.

Buckingham (who also directed the production) is a versatile performer who finds convincing depth in this portrayal of Cavaradossi. Energetic and light on his feet, he runs down stairs to hide the unfortunate Angelotti, staggers in pain after being tortured yet raises himself to mutinous defiance against the sneering cruel Scarpia, played by Sitiveni Talei.

Heralded by the menacing three-chord theme that opens the opera, Talei is a commanding presence whose powerful voice shows Scarpia ruthlessness in deep threatening notes and resonant, lecherous contempt.

Andrew Williams plays the haunted Angelotti and Greg McCreanor the clumsy, insolent Sacristan, who brings the only moments of lightness to this dark story. Scarpia’s henchmen, Spoletta and Sciarrone are performed by Adam player and Ian Fisher respectively.

The program lists Martin Buckingham as “Collaborative Directing Supervisor”. As such, he and his cast have made impressive use of an unusual performance space. Using the proscenium arch as a backdrop for surtitles and projections, and the front of the auditorium as the orchestra pit, the action of the opera is restricted to the apron of the stage, two small raised areas either side of the stage and the stairs that lead down to them. It sounds restrictive, but it works extremely well with the skill of this cast and the effective lighting designed  by Fenella Jolly.

Led by conductor Steven Stanke, the talented orchestra allows all of Puccini’s intricate variations, the juxtapositions of emotion and menace, to herald and support the action. Too often the orchestra is hidden from most of the audience, so it is good to be able to see each musician and to appreciate their specialist contribution to the parts of orchestration – such as percussionist Ben Hibbard as he ‘tolls’ the church bells.

What a great opportunity this presents for audiences to see opera so well performed at such a reasonable price!