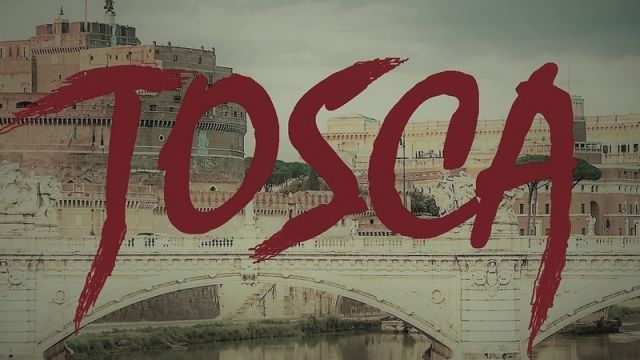 Mopoke Theatre’s production of Giacomo Puccini’s Tosca (1900), with Italian libretti by Luigi Illica and Giuseppe Giacosa, is an absolutely charming and engaging new production, continuing Mopoke’s particular theatre aesthetic of performing opera in the most unlikely but accessible places.

For the 1hr and 40 minute edited and adapted version of this great romantic and tragic opera, they are performing in the Clayton Wesley Uniting Church, and very effectively too.

Tosca is based on Victorien Sardou’s La Tosca (1887) a romantic melodrama that Sardou wrote for Sarah Bernhardt. Puccini saw La Tosca a couple of times in Milan in 1889, when Sarah Bernhardt’s company was touring Italy. His imagination and music talent was immediately engaged with possibilities.

At this period of his life, Puccini was attempting ‘verismo’ opera, which basically translates as ‘realistic opera’. The main Puccini ‘verismo’ operas are his most successful La Boheme (1896), Tosca (1900), and Madam Butterfly (1904). This was an attempt to reform opera as well as complement the relatively new forms of ‘realism’ and ‘naturalism’ in the theatre as exemplified by the plays Ibsen, Chekhov, Strindberg and Shaw. As Puccini wrote in a letter to his publisher, Giulo Ricordi, encouraging to secure the rights for play, “I see in thisTosca the opera I need, with no overblown proportions, no elaborate spectacle, nor will it call for the usual excessive amount of music.”

Puccini was reacting against the grand opera of Wagner and Verdi, and seeking something that was more realistic. That he was not completely successful is partly due to the romantic, musical nature of opera itself, and the popular melodramas, such as La Tosca, on which Puccini’s are based. Nonetheless, there are elements of ‘realism’ and ‘naturalism’ in these three major Puccini opera, including placing the dramatic action within a more realistic and intimate environment, such as Scarpia’s private apartment inside the Palazzo Farnese, Rome.

By a relatively bizarre twist, considering the very theatrical self-consciousness of opera, some of Puccini’s most ‘naturalistic ‘ and ‘realistic’ moments are in his best arias and love duets, exemplified by Tosca’s exquisite Act 2 confessional aria ‘Vissi d’arte’ (‘I live for Art’), and the Cavaradossi’s philosophic Caesar Act 3 confessional aria ‘E lucevan le stele’ (And the star shone’). These famous arias are amongst the highlights of Puccini’s Tosca, and they are again in this production.

This issue of ‘verismo’ in Puccini’s major operas has been one of the reasons why these operas in particular have been successfully produced in more intimate performing venues than the large proscenium arch theatres in which they were first produced. .

For this production of Puccini’s Tosca Mopoke Theatre Productions have chosen the Clayton Wesley Uniting Church, at Beulah Park. This works very well, particularly for Act 1 of Tosca, which is set within a church, Sant’ Andrea della Vale in Rome.

One of the highlights was the Te Deum sung by a Chorus of local Adelaide singers. I have seen a lot of productions of Tosca, but I have never heard the Te Deum sung so powerfully. One of the reasons for this is that the singers, including the leads, were ‘un-mic’d’. There was no technological amplification of the voices, which meant that you heard – really heard - the natural human voice.

Subsequently, at certain moments, due to the magnificence of the music, like in the Te Deum and the wonderful love duets and major arias, this production approached and occasionally reached what Coleridge called ‘the sublime’. This a state of euphoric grace that potentially lies within any great work, but is not always achieved. In this production it was, especially in the Te Deum.

Congratulations to Mopoke Theatre Productions for this truly engaging and rewarding production of Puccini’s Tosca.