The True Story of Butterfish by Nick Earls 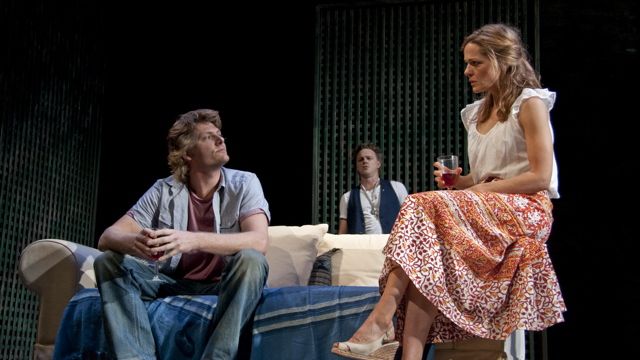 One of Australia’s favourite authors, Nick Earls has had four previous books adapted for the stage by other writers. Butterfish is his first venture into play writing. He developed both book and play in parallel.

Earls’ appeal is his skill for developing lovable, self-deprecating Aussie males in the 18-40 year-old range. Butterfish doesn’t disappoint in this regard.

Protagonist Curtis Holland (Myles Pollard), is songwriter and leader of Butterfish, a band that achieved international fame, sold millions of records and burnt themselves out in the travelling, performing and living in each other’s pockets.

Curtis comes home, retires to suburbia – Kenmore in Brisbane (but future productions might adapt this to any appropriate region that fits the local character for the play’s humour) – and tries to become ‘everyman’ again.

His closest neighbours, divorced mother Kate (Caroline Brazier), adolescent daughter Annaliese (Penny Harpham) and son Mark (Jason McLaren), adopt him instantly. Mum is attracted to his personality and the fact he can cook; Annaliese develops a crush on him because of his fame and because he discovers her good backing voice for new songs he is writing. Adolescent Mark is more attracted to wild, dissolute Derek, the high profile lead singer from Butterfish and Curtis’s house guest. Mark and Derek go on a drinking binge and rejoice in Space Invaders, a nostalgic relic from Curtis’s past.

Derek flirts with both mother and daughter next door. In addition, Curtis discovers that his wife and Derek had sex during the band’s glory days.

Nathaniel Dean plays Derek as well as Curtis’s gay brother, Patrick – two engaging characters, and he revels in both – and could well tip the audience focus his way. To Pollard’s credit, he remains strongly resolute as everyman Curtis. We in the audience were relieved when Derek returned to LA where he could rampage at will.

Director Andrew Ross and his crew made the broad stage work for the play’s many scenes. Back-wall projections captured the essence of the various locales, but somehow most actors failed to deliver their dialogue so it all travelled beyond mid-auditorium.

The True Story of Butterfish has great potential. It’s still ‘green’, but this popular premiere will enable Earls to tighten and clarify the script as needed. It could become as popular as the best of his books.