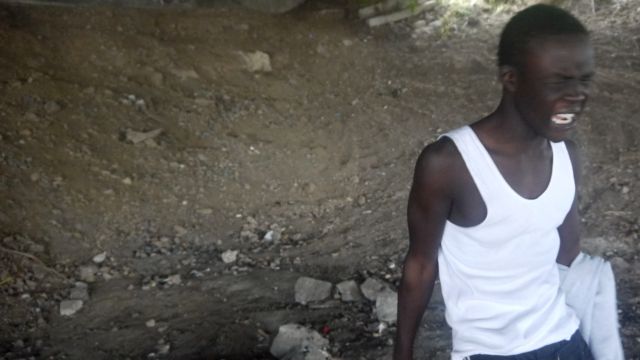 Under a bridge with a graffiti backdrop, a set of a couple of simple scaffolds and a stage of hilly rocky dirt to work on - raising the dust are five strong and talented young actors who express some of the torture of lives fractured and destabilised by brutal neglect, violent attack, the abuse of substances and mental illness.  This is confronting site specific theatre embedded in a wholly suitable site.

Displaying strength and commitment to the subject matter, the actors embody their characters and address the audience unflinchingly as youth who have experienced homelessness. The four young male actors roam while the girl stays comparatively still.

This is a strong uncompromising work drawn from the very real experience of homeless youth.

By contrast toSite Unseen, presented earlier this year by the Melbourne Festival, there is no confusion as to where the audience is placed in relation to the performers.  Here we are watching actors at work.  There is no discomfort and embarrassment or sense that someone may be being patronised, either audience or performer, through a diluting of the brutal realities of dysfunction that often surrounds and underpins homelessness - in an effort to make this knowledge palatable for an audience.

This work is atmospherically lit by Richard Vabre and underpinned skilfully with evocative soundscape by Christos Siamas.

Although Casey Nicholls' writing is strong, there is some lack of clarity in the definition of individuals at times; though this could be an intentional amalgam of voices, it did suggest for me that another level of understanding could be instilled if the writer takes a small side step and allows a director to add their interpretation.

Underpass is a significant achievement.  Untreated and Casey Nicholls are certainly artists to watch out for.   Hopefully this work will be restaged for a return season.