For Unto Y’All: The Very First Christmas in the Wild West 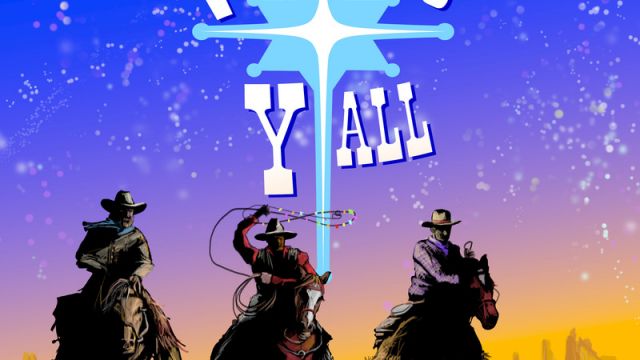 Robert Sterling’s For Unto Y’All: The Very First Christmas in the Wild West is a delightful gospel musical based on the Biblical Nativity story about the birth of Jesus Christ. In this version, however, whilst the characters’ and town names remain the same (Joseph, Mary, Bethlehem, Nazareth) we are in Wyoming in the mid-West of USA in 1880.

The story begins with the ‘townsfolk’ bemoaning the fact that they are in a somewhat relative state of economic and personal depression. The local carpenter, Joseph (Michael Denholm) attempts to enliven them with a toe-tapping hoedown number, which wonderfully sets the tone for the rest of the show. Joseph and his girlfriend, Mary (Rebecca Raymond) then announce their engagement to the town, which is met with some negativity. Joseph walks Mary home, and they sing the first of the romantic duets and ballads that are part of the highlights of this show. Joseph leaves Mary, who is then suddenly visited by the Archangel Gabriel (Andrew Crispe) and his two companions. We know they are angels because, whilst they are ‘Western’ gunslingers they are in immaculate and pristine white. We then go through the ‘Immaculate Conception’, with Mary continually fainting and Gabriel concerned that the reason might be he is wearing a ‘Lone Ranger’ mask. The scene is hilarious and is repeated when Gabriel later visits Joseph.

It is in scenes such as this, when the Nativity story is not taken so seriously, that this theatrical oddity is at its best. Another example, in the second half of the show, is when Joseph and the heavily pregnant and still unmarried Mary arrive in Bethlehem. They come to the local Bethlehem Saloon, which is full of cowboys and lusty hostesses. The Bethlehem Saloon is run by Gracie (Sarah Nagy) and the subsequent scene between Mary and Gracie is truly hilarious, as Mary endeavours to explain her situation, i.e. the ‘Immaculate Conception’. This was my favourite scene and wonderfully performed by the Rebecca Raymond and Sarah Nagy.

Director and Musical Director Sharon Raymond, and Choreographer, Brady Lloyd have done a terrific job in leading this ensemble of 40 highly committed and energetic performers. Whilst I am critical of some of the staging, mainly the interminable scene changes that could have been overlapped with the action already starting, nonetheless the overall experience is highly pleasurable. This is mainly due to excellent singing by the entire ensemble and some stand-out performances.

Rebecca Raymond is truly wonderful as Mary. She not only plays the character with great humour (her inability to say the word ‘virgin’ made me giggle), but she also sings her songs with great beauty. I particularly liked her gentle and melodic lullaby, “Hushabye, Sweet Jesus”.

The main stand-out performance for me, however, was Andrew Crispe as the Archangel Gabriel. This hilarious ‘Django’ inspired evangelical character lifted the production into another level whenever he was on-stage. Extremely engaging, terrific singing, and, dare I say it in regard to an Archangel – very sexy.

For Unto Y’All is really a Christmas show, but what a treat to have the joyous Christmas spirit around at this time of the year. Furthermore, you don’t have to have a Christian ‘faith’ in order to enjoy this show.