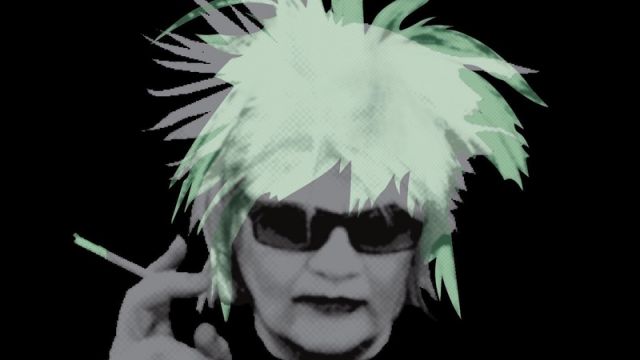 Andy Warhol’s relentless pursuit of fame is what defined him. It was to be the catalyst for many of his exploits. Performer Garry Roost gives us a summary of the eccentric man and his interactions with his friends through his time at “The Factory”.

The intimate setting of the cabinet room at Treasury 1860 was perfect for Roost’s foray into the private thoughts of Warhol. Complete with trademark sunglasses and his quiet, raspy, almost child-like voice, Roost begins with Warhol’s relationship with associate Valerie Salanas, who was to be the woman who attempted to take the pop art icon’s life.

A meticulous observer, Roost captures the vulnerability of the artist. His friendships with “it- girl” Edie Sedgwick, Truman Capote, Lou Reed and various wannabe actors and artists is tackled, with Roost delivering all the characters. Small changes are made to his appearance, with accessories sourced from a table filled with hats, sunglasses and a feather boa. Changes to his voice and tempo of speech were also used with varying results.

Roost is able to convey Warhol’s story directly to the audience, as if chatting with friends. Capturing Warhol’s eccentricity was imperative in offering up an authentic and sincere account of the last 40 years of his life.

The script is delivered at rapid pace and would benefit with more pauses. Staging felt clumsy at times when I attended, with Roost disappearing behind the backdrop.

I longed to hear more music of the 60s era, which was only used sparingly through the show. It was to cut out many times at this performance, and it was distracting. These are easy fixes and ultimately did not take away from the enjoyment of the piece.