What A Shock ‘N’ Shame 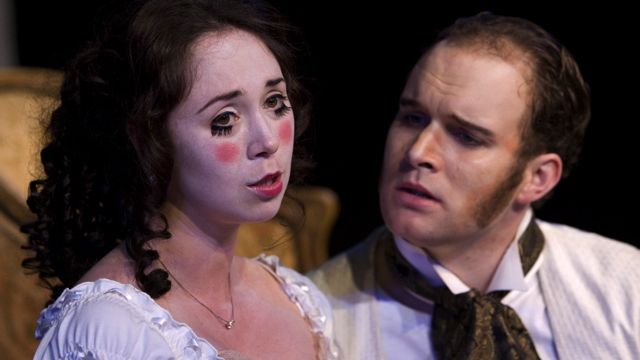 Are you looking for a bit of fun, escapist entertainment?! Then the New Theatre’s current production of local playwright Tony Taylor’s What A Shock and Shame fits the bill exactly.
Tony Taylor's play transports us to a different time and place. The time is 1888...the place is London...the venue is the Paragon Theatre of Varieties in Miles End. We are in the grip of Jack the Ripper fever, and go to the theatre to take our minds off the drama that surrounds us. We join the assorted toffs and riff raff of Victorian London and take our seats to watch a small company of actors perform a melodrama inspired by the novel East Lynne, written by Mrs Henry Wood. The melodrama features a dandy of a cad, Archibald Carlyle, with a night of music, honour and redemption, a little bit of shock and a whole lot of shame!
Stephen Colyer’s production goes all the way and more in taking us into the Victorian nether-world! The program comes in the form of a London News broadsheet of the time with such delights as an advertisement describing the ‘riviting’ things a woman should know such as the folding of serviettes!
Before the show and during the interval members of the cast come up and chat in character to the unsuspecting audience in the foyer.
Some actors stayed briefly in the audience as the show started and heckled the action on stage. Andy Peterson tinkled away at the piano through the show and, at times, was joined at the piano by cast singing ballads.
Through the play there was a small screen, stage left, on which were projected instructions to the audience on how they should physically respond to a particular scene on stage. This created a real fun pre-talkies atmosphere.
A cast member sitting in the middle of the front row showered shreds of paper onto the stage whenever any-one in the cast mentioned the word snow.
A large cast, in fine voice and hamming things up, revelled in Taylor’s melodramatic romp. In the leads, Octavia Barron-Martin and Doug Hansell gave confident, memorable performances.
A whole lot of fun, What A Shock ‘N’ Shame plays the New Theatre, Newtown, 542 King Street until November 7.
David Kary