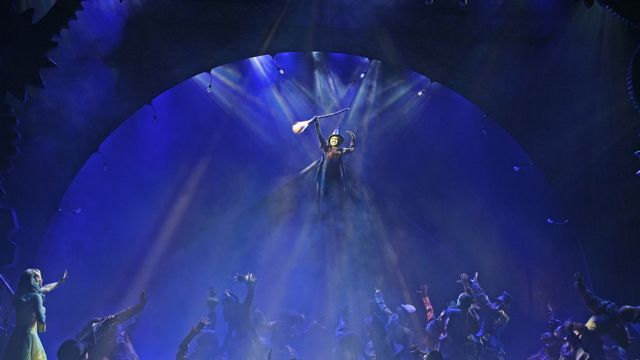 Geraldine Turner has taken over the role of Madam Morrible and will play the rest of the Brisbane season which ends April 2. She stepped into the role when Maggie Kirkpatrick, who played the part in Melbourne and Sydney, took a well-earned break. The role is a walk in the park for musical theatre veteran Turner. With no solo songs, she makes what she does have to sing, matter, and with her superb comic-timing she’s a formidable presence in the show.

Also new to the cast is hunky leading-man David Harris as Fiyero. Leading the company in “Dancing through Life,” and duetting with Lucy Durack (Glinda), on “As Long As You’re Mine,” he commands the stage whenever he’s on, and sings like a dream.

Laura Bunting, the alternate Elphaba, who’s now playing matinees three times per week in the show’s 9 performance schedule, is also impressive. Hitting her top notes with ease, and acting with conviction and heart, she’s a powerhouse ‘girl in green.’

After playing for three years, the show is in good shape, the chorus are well-drilled and on top of their game, and the vocals couldn’t be better. 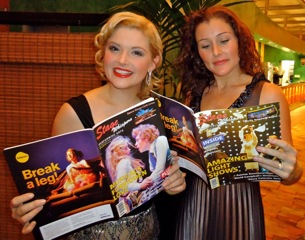 We interview Jemma in the March April 2011 edition.

Two generations of the Spicer family caught the opening night of Wicked at the Capitol Theatre, Sydney on Saturday September 12, 2009. Rebecca Spicer, aged 13, there with dad David, clearly enjoyed herself.

Wicked was Wicked. My Dad has dragged me to a lot of musicals over the years but Wicked was the best musical I have ever seen. It was easy to follow and the songs were catchy. It was full of colour … well green. All the actors had beautiful voices and all of them suited their characters perfectly. Lucy Durack as Glinda could sure sing high!!

After seeing Wicked I no longer see Dorothy as a sweet young girl, she is a thief and a murderer. Throughout this musical you see all these little cover ups that the Wizard of OZ has made like the Wizard being such a lovely guy and the Wicked Witch of the West being wicked and in truth she isn’t.

For all the people out there that love dumb blond jokes this is the musical for you. Wicked was the funniest musical I have seen and in between all that comedy an unlikely friendship develops. There is one beautiful, popular young girl who gets everything she wants and a girl who is green and unpopular. These two girls become the best of friends and form a bond which carries on through whole musical.

Bert Newton showed a new side to one of his many talents playing the Wizard of Oz. Singing and dancing isn’t what you usually see him doing but he did a great job of it and he really suited the role of the Wizard.

The treats continued at the after show party. To get there we had to walk onto the stage. I also saw quite a few celebrities from Packed to the Rafters and All Saints. These are two of my most favourite shows so it was very exciting seeing them in real life.

Sometimes seasoned theatre goers can get a little jaded so it's nice to hear the perspective of those a little greener to the world.

At the after show party some men of an older vintage told me they found this production a little hard to connect to. It didn't reach out and move them.

I saw the original Broadway cast from the front row in 2005, so being in the clouds at Capitol Theatre in 2009 was a more remote experience.

This is a production where the star is the show, in particular, the lighting and effects. The end of first act where Elphaba rises in blue beams of light is stunning. Also gorgeous were the dazzling green ensembles of Oz.

None of the principals really soared to a height that matched the technical wizardry we saw on stage.

It didn't matter. Wicked's strength is a brilliant book and sweet tunes. For lovers of musicals it's not to be missed.