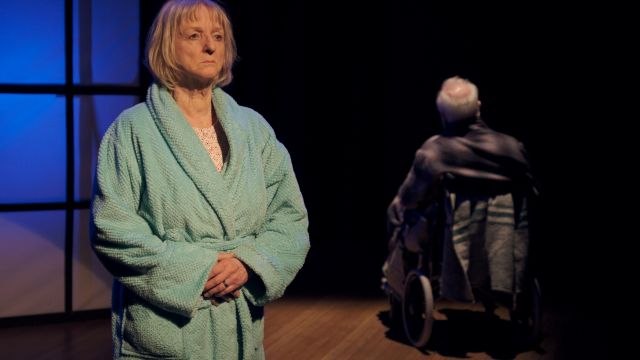 The Window Outside is an accessible, engrossing and deeply thought-provoking work.  Based in realism with a magic realist twist, it is a rich work about family, aging, illness, dementia and the end of life.

As part of this years Seniors’ Week,  it is a must - particularly if the subject of aging parents or family members or one’s own aging is looming and/or pertinent.

On opening night Dying with Dignity Victoria’s Dr. Rodney Syme treated the audience to an inspiring presentation.  This enlightening talk generated much intense and exuberant discussion in the foyer and was an excellent introduction to the performance, heightening the audience’s anticipation.

The play itself opens sensitively and movingly with a mature couple dancing together in tender loving intimacy.  With an edge of humour they discuss the simple family things that their lives, of love for each other, have built and been built on.

Then it becomes evident that the husband is no longer able-bodied and the communication between the two is predicated on what the wife is imagining. Evelyn, played by Carrie Moczynski, instigates much of the conversation that is so beautifully written by Belinda Lopez.  Frank, played very skillfully by Ian Rooney, responds with reciprocal warm tenderness.  Ms. Lopez paints this particular relationship with acute awareness.  It was established in an era when gender roles were clearly defined, from a time when a generosity of spirit informed our interactions with each other.

What the writing, sympathetic direction and marvelous acting do is strongly substantiate all that has come before in the couple’s life.  We are privy to the rich workings of a precious relationship that could be on the precipice of being shattered through the possibility of Frank and Evelyn being separated because of their inability to take care of each other any more.

Frank and Evelyn’s long-suffering daughter Sharon is played by Julie-Anne Evans.  She comes across as suitably haggard and despairing.  Sharon is bearing the brunt of her parents’ growing dependency on her.  She is raw with exhaustion and concern for her parents. And, as if that isn’t enough, her teenage children are mutinying and husband straying.

Then there is another daughter Miranda (Antonia Mochan) who flies in for a brief visit from New York where she has established a lifestyle as a curator of an Art Gallery.  She has a husband/partner of sorts, but, most particularly, an enigmatic drive for freedom that, most specifically, seems to define her.  Her role is more as contrast and she maintains her cool and appears less affected by her parents pending upheaval then one would expect.  This could be self-protection. s with every family, the knife-edge of a dramatic change can touch unexpectedly on atavistic sensitivities.  Perhaps this is what prompts the daughters to be precipitate to their parents moving into an aged care home in a forthright and not particularly sympathetic way.

There is obviously a very good line of communication between the writer and director Liz Connors.  Direction is unobtrusive, allowing the story to unfold simply with clarity, swiftly, smoothly and engagingly.

My plus one and I found this work to be a rich and rewarding springboard for discussion about the work itself in relation to the numerous deaths of family and friends that we have experienced.

Don’t hesitate to get to it if you can.