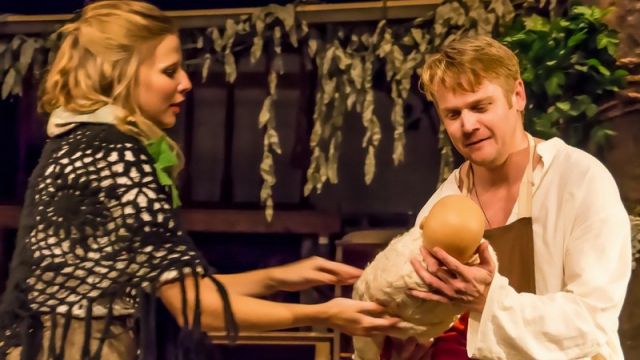 This inspired interpretation of the classic was very well received by both the Sondheim devotees and those audience members not familiar with the piece.

Joshua McCann-Thomson had assembled a talented ensemble cast, well versed in the art of performing Sondheim’s unique style and they carried it off perfectly.

Under the Musical Direction of Ethan Jones, the cast ensured that the lyrics were never sacrificed throughout the fast pace of the show, and what a hectic pace it was.

The imaginative set had the forest and interior scenes entwined, thus enabling fluidity from scene to scene: enhanced by Choreographer Tess Burke’s clever movement and the crew overcame the many challenges that the set posed to deliver the technical support that the production demanded.

In such an experienced cast it is difficult to single out individual performances as everyone gave 110% and each had their opportunity to feature in the telling of the story.

One thing shone though: everyone associated with the production had a ball and it was obvious in the dedication to their respective tasks both on stage and off.

This production is certain to win over more Sondheim fans.