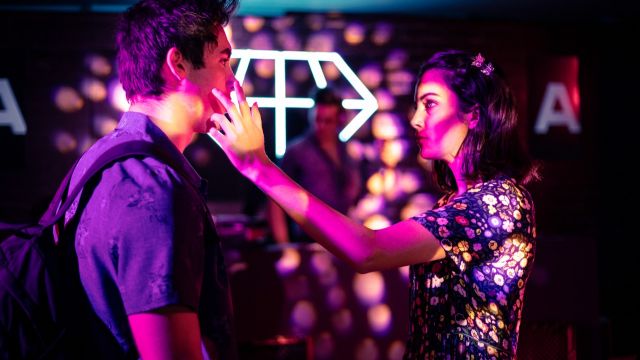 Solid direction shows in every aspect of a play. It’s obvious that director Elodie Boal has a well-formulated vision for this production of X-Stacy and she’s been able to impart it clearly to the cast and crew. Boal creates an immersive environment, using the entire space as her stage, including placing a ‘bouncer’ on the front door and giving everyone glow sticks as they enter.

Set in the late 90s, X-Stacy investigates rave culture and the ubiquitous drug use that accompanies ‘doofs’. The cleverly written script by Margery Forde considers the concept of the state of ecstasy and the ways in which humans have tried to attain it. We see the heart-wrenching sadness experienced by a family that’s lost a daughter and sister to party drug use. As characters search for who to blame and atonement for the parts they played in Stacy’s demise, one is left with a feeling that there is no real solution, nor any one person or thing to blame.

Lighting Design by Bruce Noy makes you feel like you are at a rave from the moment you walk in the door. The LED strip lights that make up both the crystal in the night club and the crucifix in the church perfectly support the play’s allegorical themes.

Mal Boal deserves great praise for his work as Sound Designer. The soundscape is amazingly well thought out and music is completely on point. The sound effects enhance your understanding of the ecstasy drug culture and the characters’ experiences. 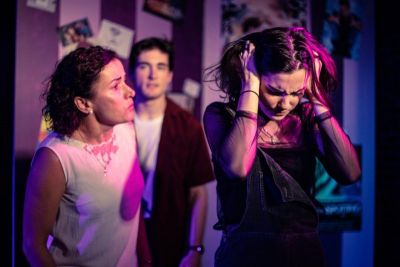 Set Designer Tom Antonio finds some clever solutions to the play’s scene changes. There’s a suitable balance between simple and effective set pieces and an eye for little details that tell a big story.

The cast is well rehearsed and focussed. They show good teamwork and trust. Alison Telfer-McDonald delivers a stand-out performance as Anne. She’s very believable in the role of Ben and Stacy’s mother and shows a calm control where others may have indulged in melodramatic histrionics. Katie Clarke brings a nice energy to the role of Zoe. There’s a natural rapport between Ben (Connor Hawkins) and Stacy (Ruby Sanders), while more could be done to build sexual chemistry between Fergus (Arun Clarke) and Jenna (Ebony Hamacek).

While the play was first performed around two decades ago, the themes are no less relevant today. Pill testing and deaths relates to ecstasy use are still very much in the public consciousness. This production forces you to look at the human cost of treating young people’s drug use as a criminal rather than a health issue. It reminds us that humans have always searched for a way to reach a state of ecstasy and while once religion was the opiate of the masses, contemporary young people often prefer to go straight for the opiates and skip the religion.