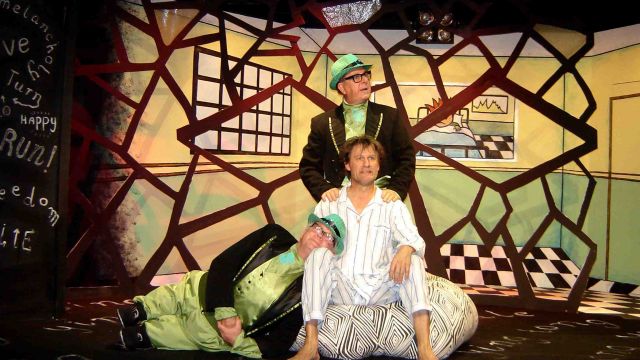 Roy Smiles’ stage study of Spike Milligan in the final year of The Goon Show was performed in an ingenious set that drew the audience into the befuddled mind of the institutionalised writer/performer.
The four actors were splendidly cast, both for their acting talent and for their physical likeness to the Goon member each played.
Tall, thin, dishevelled Grant Marks sympathetically played the anguished, delusional Milligan, still suffering shell shock from his WW2 action and frustrated by his lack of inspiration as he struggled to write the final Goon Show episode.
Colleagues Peter Sellars (Errol Morrison), Harry Secombe (Jody Collie) and Wallace Greenslade (Bill Hastings) wander in and out of his psyche, and through them he recalls memorable snatches from past shows. (The actors recreate with the distinctive voices of the multiple characters beautifully.)
These three also portray doctors, psychiatrists, mental institution warders who provide an insight into Milligan’s mental decline.
The radio series was hilarious and selections from that off-the-wall comedy juxtaposed with Milligan’s despair at no longer finding ideas, gave this play a darker edge. This company balanced this black comedy with lightness that made the event good thoughtful entertainment.
Hats off to director and assistant director Grant and Solitaire Marks and all crew for a success with such delicate material.
Jay McKee

Photograph: Grant Marks as Spike Milligan, with Jodie Collie and Errol Morrison as the leprechauns.