It’s early 1945 and the war’s not over yet.  Two Royal Australian Navy lads, Keith and Jimmy, only seventeen, are in training.  Any day now they may be sent ‘up north’ to join the fighting.  They don’t know what to expect – although Jimmy thinks he does.  The play depicts a series of their weekend leaves.  The lads stay at Young & Jackson’s Hotel, having pulled a bit of a swifty to get in there.  They get pissed, get into fights with the ‘septics’ (Yanks), rehearse their smutty cabaret skits – all about poofters - and keep an eye out for girls.  Then they meet Lorna, eating alone in a Chinese restaurant.  She comes back to the lads’ room.  She’s got a broken heart and she needs to forget… Meanwhile, Keith’s best mate Les has already been ‘up north’ and he’s in a psychiatric hospital, wracked by visions of what he witnessed.

For interstate readers, Young & Jackson’s is a famous hotel on the corner of Flinders and Swanston Streets in Melbourne, opposite the iconic Flinders Street Station and almost as iconic itself.  It’s famous not least for the near life size nude, ‘Chloe’, that has hung over the bar since 1909.  As a history of the hotel says, Chloe may well have been the first naked female a lot of young blokes saw before they went off to die in either war. 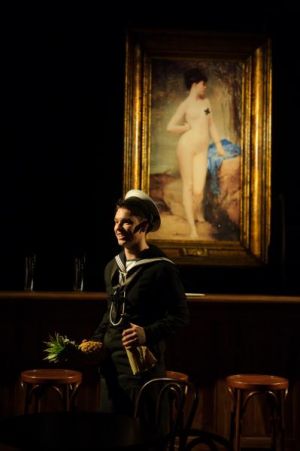 A perfect replica of the painting hangs over the bar into which part of the large performing space at fortyfivedownstairs has been converted.  I don’t know what Y&J was like in 1945, maybe a step up from the usual tiled blood houses, but I doubt patrons sat at café tables with bentwood chairs as the audience does for this show.  But ‘Chloe’ is a nice touch; she’s more than set dressing establishing where we are.  As has been noted by many before me, Chloe’s nudity has a kind of innocence and a kind of yearning that is reflected in Don Reid’s characters – and the poster for the show uses Chloe very wittily.

The text is based on reminiscences from people who lived and loved back then and the text is affectionate and non-judgmental.  The feel of the time and the period dialogue and attitudes are spot on.  It’s refreshing too to be reminded that people in 1945, particularly with the pressures of wartime, were not so stitched up as we might think they were, and that sex was certainly not invented in 1962.  In regard to sex, the characters are extremely frank even while being evasive about their feelings.

There are, however, a number of unintegrated elements. There’s the homoerotic quality of ‘mateship’ together with Aussie blokes’ love of dressing up as women.  There’s the horror of war that is also a test of fire – or ‘manhood’.   The kill-or-be killed imperative because ‘it’s war, mate’.  There’s the numbness of loss and the need to feel – something, anything – that can break through what a woman thought were her boundaries.  These elements are present, they are set up, but they don’t mesh and they don’t develop very far. Perhaps because of this or because the text is based on reminiscences, there is a degree of repetition in the statement of attitudes.  At the start, we’re led to think that this is to be about the friendship of two men.  In a way, it is, but there is no real conflict between them and the friendship is never tested – no even by ‘the girl’.

So, as a play per se, Young & Jackson maybe bites off more than it chews, but director Wayne Harrison keeps what could have been static moving with terrific pace, even while allowing for light and shade and emotional truth, and including the audience in the story.  Martin Kinnane’s lighting unites three playing spaces and the transitions between them.  Costume designers Dann Barber and Michael Hili have the gift of the naval ratings’ uniforms (who knew they were so complicated?), but Lorna might have been a touch more recognisably 1940s. 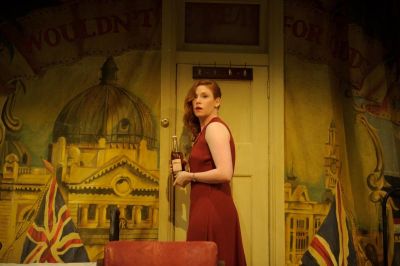 It is the cast, under Mr Harrison’s direction, which ensures that this is an entertaining evening.  All of them hurl themselves at their characters and inhabit them with conviction.  Charlie Cousins is solid as the softer, more ‘artistic’ Keith – who also writes the ‘filthy’, fit-for-men-only skits he and Jimmy perform.  Jacob Machin is Jimmy – a priapic seventeen-year-old who keeps photographs of all his conquests in his wallet.  Mr Machin is all attack and frenetic energy, like a young Russ Tamblyn, but he reveals an uncertainty and vulnerability under the jokes, the bragging and the gung-ho bluster.   Gabrielle Scawthorn as Lorna – the strong country girl brought low in the city - balances a thin veneer of primness over her character’s desperation.  Jimmy calls Lorna a tease, but she has to get past herself, not him.   She runs cold, then hot, then cold...  The lads are confused, but we are not.  Ms Scawthorn coveys this beautifully and we feel for her character.  Sam Duncan plays the less flashy, joke-free Les with moving sincerity and his reveal of what he saw ‘up north’ is chilling.

Young & Jackson is not a great play.  It is a number of slices of life slung together and into which the writing does not delve too deeply.  But it does provide a lot of fun in an entertaining evening with many ‘dirty’ jokes, many honest and dishonest emotions, and characters seen with clear-eyed love.