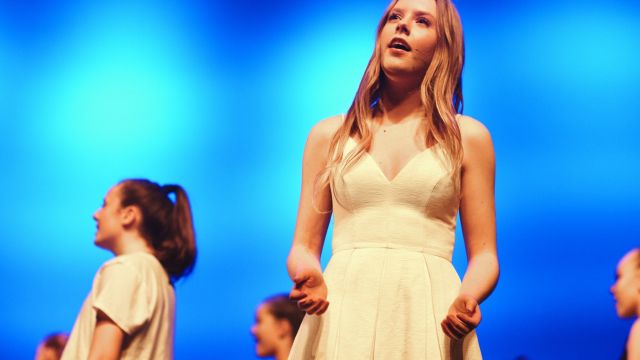 Sophia Chesworth released a song that went to the top of the country music charts whilst still at High School. She attends the Australian Performing Arts Grammar School (APGS), which allows students to study and chase a creative career.

Sophia moved to the inner-city Performing Arts school in Sydney for her senior studies because she wanted to be supported to pursue her passions.

“I have to say my favorite thing about APGS is how supportive it is,” say Sophia.

At APGS Sophia is surrounded by peers with similar creative goals and a teaching staff that understands creative learners.  At APGS the academic curriculum is fitted into the first four days of the week and students enjoy a full day of Performing Arts on Fridays.

In these specialist classes students are led by industry professionals.

Sophia is working towards her HSC in subjects she loves; she is also extending her skills and talents with people in music industry and making valuable contacts in this close-knit community.

APGS has several showcases throughout the year in venues ranging from the school’s own hall to the Seymour Centre.In Sophia’s first Showcase after she joined APGshe sang an incredible country pop song that she had written and blew everyone away with her incredible voice and catchy lyrics.

Later that year Sophia worked hard outside of school developing her EP. The song she performed at that showcase, “Replay”, was the title track of her EP as well as the first single she released.

On the day the song was released on iTunes and Spotify there was a lot of excitement at APGS. Sophia arrived to her classmates singing her song in the halls and the school celebrated the launch with an assembly where Sophia performed the song with everyone singing along with her.

Sophia launched her EP with a live show at the Royal Oak Balmain with many APGS students in attendance. “Replay” instantly shot to number 1 on the country music charts and reached number 3 across all genres on iTunes.

“Replay” climbed the charts and was featured on the KIX country radio Hottest 20 chart at number 16; it reached number 10 on the Australian Independent Record Labels Association 100% Independent Singles Chart.

Sophia released a music video for “Replay” and performed at Tamworth Country Music Festival and the Sydney Royal Easter Show. All of this coincided with the start of Sophia’s final year of high school, as she was entering Year 12 and focusing on achieving academically in her HSC.

When asked about balancing academics and her dream of making it big as a musician, Sophia said, “The support I’ve been given has enabled me to pursue opportunities for my own music and the school has helped me maintain the same academic grades that I’ve been getting, which is really important to me.”

APGS is a unique school where just over a hundred students with passions in the arts come to extend themselves and be around people who have the same drive. At APGS Sophia is surrounded by students who share the same passion that she does, but for others at the school their passion might lie in musical theatre, acting, film making, drumming or dancing instead of singing. The students at APGS come together to celebrate their creativity.