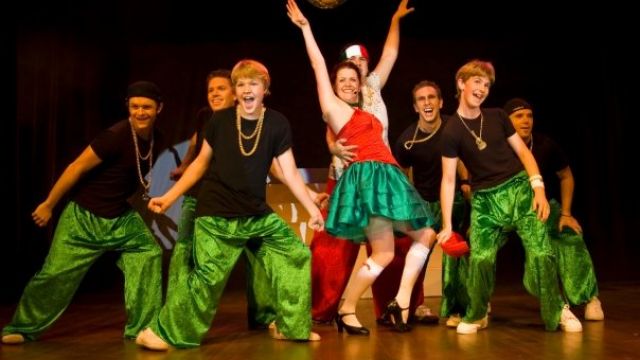 One of Sydney’s oldest and proudest musical societies is celebrating its 70th birthday. It all began because of a casting dispute.

The founder of The Regals, Frederick J Dunne, is quoted in a program as being inspired to form the musical society because of his dream of involving the whole community in his love of music.

It transpires that his love of the ensemble mistress of the Rockdale Musical Society also had something to do with it. He left the other company - to form the new one in the same suburb  - when his future wife was told her services were no longer required.

There was a happy ending for all, as they got married and The Regals have served their community for seven decades.

The current President Paul Morrision is a third generation Regal. His parents met during a rehearsal and his grandmother was the box office stalwart and patron. 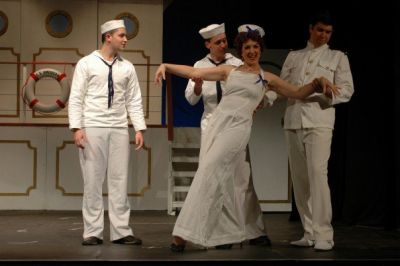 The Regals’ first production was on the 14th of November 1945.  It was the Edwardian musical Our Miss Gibbs. No doubt the audience were dressed to the nines as was their custom at the time. The venue was the Rockdale Town Hall in Sydney’s south, still home to the musical society today.

The aim of The Regals was to promote musical entertainment, create opportunities for young people to showcase their talent and assist charitable causes.

The original 1945 Regals members came from all walks of life - accountants, electricians, florists, butchers, stenographers, builders and returned servicemen and women. Nowadays, other than the addition of an IT expert, graphic designer and social networking guru, this is still the case.

This eclectic mix of people is what makes a community theatre group so interesting. With the varied skills required to put on a production; from on-stage performance and set construction, to promotions and marketing this blend of professions is integral to the success of a not-for-profit musical society. 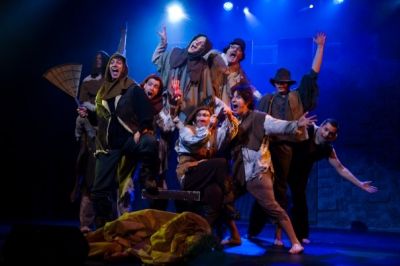 Paul Morrison believes that it is the contribution of volunteers that pumps the lifeblood through the heart of The Regals family.

“I’ve heard it said that ‘volunteers don’t get paid, not because they’re worthless, but because they are priceless’. The Regals has been blessed with many, many wonderful members over the years and without their countless hours each week of selfless sacrifice the Society would not be the wonderful place it is today.”

After seventy years, The Regals Musical Society will be embarking on its most challenging year ever.

In May it will stage the NSW community theatre premiere of Chitty Chitty Bang Bang.

Director Danielle Nicholls-Fuller is relishing the opportunity to bring their ‘Fine Four Fendered Friend’ to the Rockdale Town Hall Stage. “It will certainly be a challenge. The number one question that I have been asked since accepting directorship is ‘How are you going to make the car fly?’ All I can say is that an experienced technical team has been recruited whose responsibility is to develop the car – and it will be amazing.  To find out more you’ll have to come and see the show.” 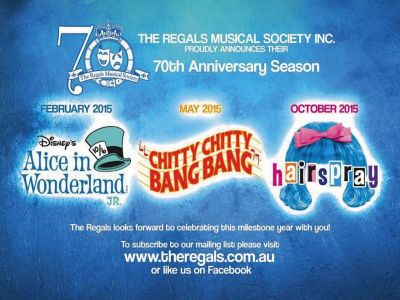 Danielle was musical director for another of the Regals’ 21st century triumphs, when it staged the world premiere of Jon English’s rock opera Paris in 2003.

The calendar in 2015 is very full. There are two other musicals Alice in Wonderland Jr in February and Hairspray in October.

Kicking off on the 8th February there will be a Member’s Family Picnic Day at Carss Park, a tradition established by members in the 1970’s.  Mid-year The Regals will participate in the biannual Spotlight Awards – the local theatre community's ‘night of nights’. There is also time for a pancake party and a gala dinner on the 14th of November.

“The Regals would not be celebrating its 70th anniversary without the ongoing support of the Rockdale City Council and the hard work of the past membership,” says Morrison. “With the celebrations that we have in store for 2015 I would love to invite as many people as possible  to come back home to The Regals and celebrate this wonderful occasion.”

Images: Eurobeat, Anything Goes, and Spamalot.

70 Years of Regal Entertainment
One of Sydney’s oldest and proudest musical societies is celebrating its 70th birthday. It all began because of a... more