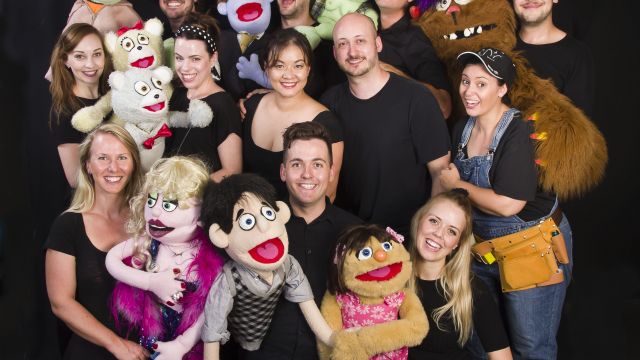 Winner of the Tony Triple Crown for Best Musical, Best Score, and Best Book, Avenue Q tells the story of a recent college graduate trying to find his way in the world.

Set in New York City, Avenue Q tells the story of fresh-faced Princeton as he struggles to find his purpose: meeting friends, finding love, losing love, and finding it again along the way. Inspired by the beloved children’s show Sesame Street, Avenue Qcreates a puppet-filled world that is a little more reflective of the difficult, R-rated realities that we face upon learning that real life isn’t as simple as we dreamed it might be.

Peter Meredith directs North Shore Theatre Company’s production of Avenue Qand said of his vision for the show: “There are few shows that combine such silliness, hilarious and provocative content with heart-felt, genuine emotion like Avenue Q. We are having a lot of fun exploring the possibilities of what you can (and can't - or shouldn't) do in this show, so audiences are in for a fun ride come opening night!”

This critically-acclaimed musical is strictly for adults only despite featuring puppets and is R-rated, containing adult topics, offensive language, and an onstage portrayal of puppet sex.

With that in mind, what can audiences expect of the show? Meredith says, “You either know Avenue Qintimately or not at all. If you know the show it’s likely you haven’t seen it because it's so rarely staged - so you'll love seeing some of your favourite numbers live with a terrific cast. If you don't know the musical at all....oh boy! Here are three words to set the scene for you: rude Sesame Street!”