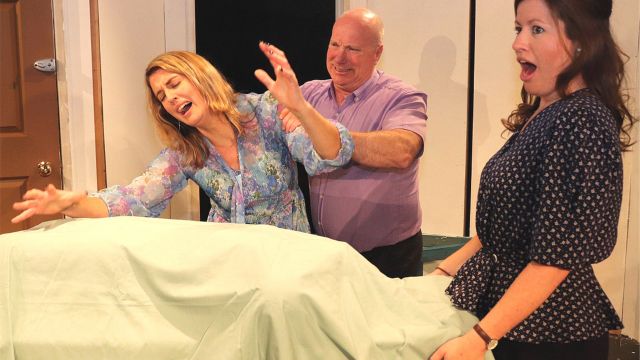 MISTAKEN identities, slamming doors and a con that spirals out of control are all taking place at Melville Theatre in September 2018.

They’re all part of the fast-paced British comedy Cash On Delivery, written by Michael Cooney and directed by Georgina Kling.

The story follows a con artist who has duped welfare authorities for years by claiming benefits for the plethora of people he claims live at his address.

But he’s sent scrambling when welfare investigators show up and is forced to prove all his boarders are real.

“I’ve seen Cash on Delivery done a few times in the UK and always felt the audience truly enjoyed it,” Kling said.

“I love hearing an audience relax, sit back and laugh freely – and that’s exactly what a farce allows you to do.

“No matter how many times I’ve seen the show or read the script, this play always makes me laugh.

“This is my first time directing in Perth so I felt this script would be a good place to start.”

On stage since she was young, Kling took a break for 16 years to focus on school and university but then threw herself back into the theatre world, embracing acting, directing, choreography, costumes and other behind-the-scenes work. After moving to Perth from London three years ago, she came across an audition at Melville Theatre for Under The Blue Sky, which she appeared in.

“Belonging to a theatre group has been part of my life for as long as I can remember,” Kling said.

“Back home, my entire family was involved and it’s nice to be so warmly welcomed at Melville Theatre.”

The main challenge with Kling’s latest production are the logistics involved – and she believes her stage manager will have the toughest job of all.

“The timing and movements of each cast member need to be just perfect to create the true farce-like illusion,” she said.

“This has to be paired with a very good backstage team to allow each crazy aspect to work, especially given we have a washing machine that rocks itself onto stage!

“But I have no doubt my amazing cast are going to make this show look easy and truly hilarious.”