The Clean House at Stirling Players 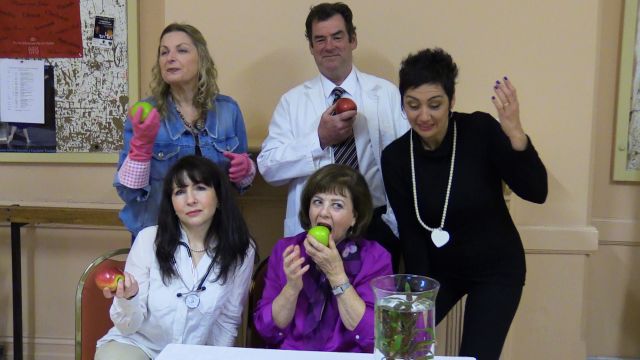 Stirling Players (South Australia) will present Sarah Ruhl’s The Clean House during September and October 2017.  The play is a quirky, romantic “dramedy” centred around Matilde, a Brazilian woman who has wound up a cleaner instead of a comedienne. The Clean Housewas a finalist for the 2005 Pulitzer Prize for Drama.  Sarah Ruhl’s script weaves together the frayed edges of conflicting lives with whimsy and wisdom.

This will be a bilingual production, Portuguese and English, with one of the actors, from Brazil, using her native tongue, and somewhat unusually, this straight play features an on-stage musician, also from Adelaide's Brazilian community.

Matilde is Lane’s cleaner, but her dream is to be a comedienne.  Lane is a doctor for a very important hospital and is married to Charles, also a doctor.  Virginia is Lane’s sister, an unfulfilled housewife who loves nothing more than to clean.  Matilda and Virginia cook up a plan to keep Lane’s house clean, while Matilde works on the perfect joke.  All is going perfectly until they find a pair of panties that definitely do not belong to Lane.  It turns out Charles is having an affair with Ana, a free-spirited woman who’s been diagnosed with cancer.

Stirling Players is offering a show about life, love, death and the search for the perfect joke.