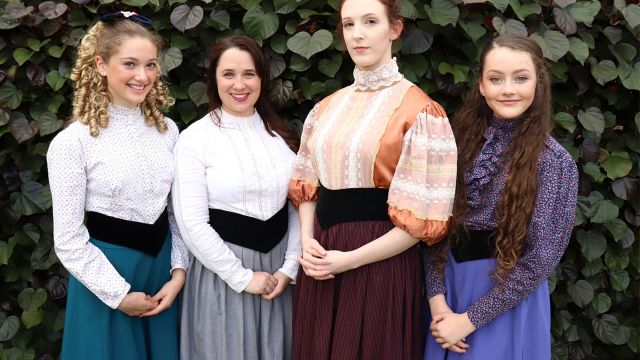 A TIMELESS classic will be lifted from the page to the stage during November 2019.

Adapted by Peter Clapham from Louisa May Alcott’s famous novel, Little Women is being presented by ARENAarts and directed by Christine Ellis at the Roxy Lane Theatre in WA.

The story follows the lives of the four March sisters – Meg, Jo, Beth and Amy – as they grow up happily together while battling poverty and wait for news of their father in the American Civil War.

Loosely based on the author and her three sisters as they passed from childhood into womanhood, the stage version keeps close to the original storyline.

“It’s a delightful family classic highlighting the strength and enduring quality of four lovely young women and their family and friends,” Ellis said.

“My main challenge is squeezing the cast of 11 on stage at the same time, along with furniture and a piano.

“The actors are also playing live music on stage during the show.” Acting for more than 45 years and directing for 30, Ellis has worked with the Old Mill, Stirling and KADS Theatres and ARENAarts, where she is currently artistic director.

She has won numerous awards over the years at the Hills Festival of Theatre, Youthfest, Mandurah One-Act Play Festival and Blak Yak Theatre’s 24-hour stage project.

Most recently, Ellis directed Bitten which was named best youth comedy at the Hills Festival of Theatre and also scored several acting awards.

“I have directed Little Women once before and thought it would be a lovely show to bring to the Roxy Lane Theatre to give the audience a real taste of culture and entertainment,” she said.

“I have worked with young actors for more than 20 years and know the strength of talent we have in Perth at the moment, so I wanted to showcase this in an end-of-year show.”