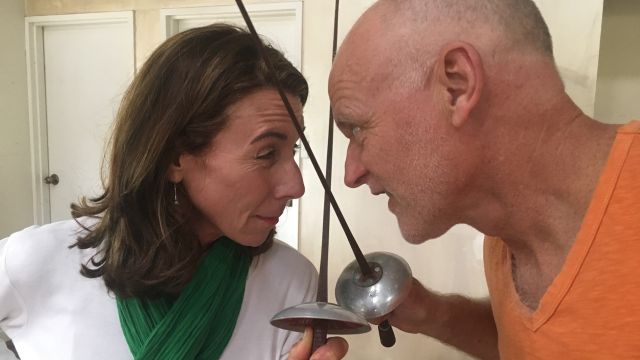 Farce is one of the most entertaining forms of theatre! Highly exaggerated, extravagant, and thus improbable situations propel the action. It is also characterized by physical humor, the use of deliberate absurdity or nonsense, and broadly stylized performances. Furthermore, a farce is often set in one particular location, where all events occur, with many many doors!

Ken Ludwig, famous for Lend Me A Tenor,is a modern master of farce. His subsequent play, Moon Over Buffalo is equally as masterful.

Moon Over Buffalo has five doors, eight actors, Cyrano de Bergerac and NoëlCoward! There’s two hours of mayhem, when a struggling repertory theatre company pull out all the stops when they discover famous film director Frank Capra is coming to watch a matinee.

If he likes what he sees, he might just cast them in his movie remake of The Scarlet Pimpernel. Unfortunately, everything that could go wrong does go wrong, including uproarious uncertainty about which play they’re actually performing.

Christopher Hamilton, the play’s director, said “Moon Over Buffalo is a triumphant comedy. The play is stuffed with comic invention, running gags and a neat sense of absurdity. An evening of farcical delight that should not be missed.”

Hunters Hill Theatre have assembled a cast that includes Liz Grindley, Dean Nicholson, Anna Desjardins, Dimitri Armatas, Jenny Jacobs, Jack Mitchell, Robert Sharpe and Samantha Lemon. “The cast are phenomenal!” said Hamilton. “They have approached the play with gusto and verve and bought new meaning to the old phrase -throwing themselves into it!”

Hunters Hill Theatre presents Ken Ludwig s Moon Over Buffalo for a strictly limited season from December 1st until 10th, 2017 at the Hunters Hill Town Hall. Bookings can be made by ringing 9879 7765 or go to the website www.huntershilltheatre.com.au