Play On! - A Love Letter To Community Theatre 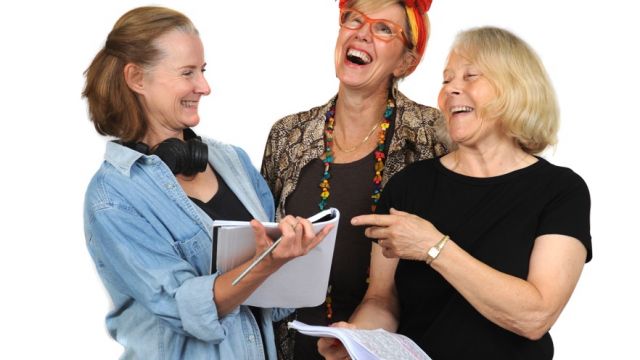 Hunters Hill Theatre (HHT) continue their 2019 season in June with the comedy, Play On! by Rick Abbot, directed by Margaret Olive

Play On!tells the story of a plucky community theatre group trying desperately to produce a murder mystery play with a plot which doesn’t actually have a murder, an interfering playwright who keeps changing the script, and an increasingly disgruntled cast and crew.

All your typical ‘theatre types’ make an appearance in this romp. The Director (Susan Mozell) along with the Stage Manager (Carol Keeble) and Lighting and Sound Technician (Frances Etheridge) work furiously to keep on top of the Playwright’s (Anthea Brown) script changes and keep her out of the way of the bickering cast, which includes Character Actors (Michael Richmond and Lois Marsh), a Supporting Actor (Georgia Golledge), a Villain (Mark Massingham), a Juvenile (Blake Eaton) and an Ingenue (Prudence Foxe).

Presented in 3 acts, the audience is witness to a rehearsal of the dreadful show ‘Murder Most Foul’ (Act 1), a disastrous dress rehearsal (Act II), and the ‘Opening Night’ performance (Act 3), in which anything that can go wrong, does.

If you like Noises Off!, the Play That Goes Wrong, or have ever been a part of a community theatre production, then Play On!  is in a similar vein.