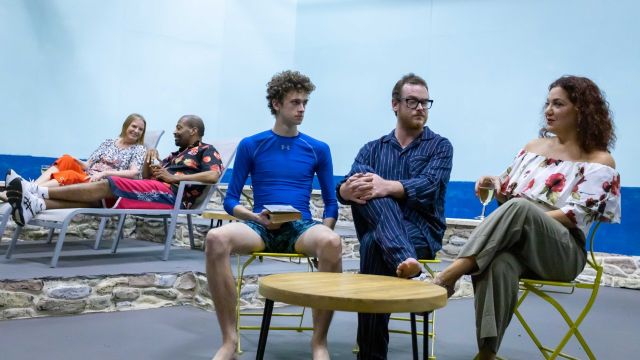 The November 2019 production at The Guild Theatre is Sufficient Carbohydrate by Dennis Potter.

An English businessman and his American counterpart, both employed by the same company, take a holiday with their families on a Greek island. The aim is to cement their working relationship. Of course, things don’t go according to plan. Trans-Atlantic communication issues, coupled with a generational divide, make things difficult from the very beginning. However, during an alcohol-charged evening, the situation naturally escalates! Things are said... attractions ensue... and the unforeseen consequences of that evening must be faced the next day.

Playwright Dennis Potter gained fame as a screenwriter for British television. He is best known for his BBC Television serials Pennies From Heaven (1978) and The Singing Detective (1987) and for his television plays Blue Remembered Hills (1979) and Brimstone and Treacle (1976). Written in 1973, Sufficient Carbohydrate is Potter’s only theatrical play (although it was adapted for television under the title Visitors in 1987).

Sufficient Carbohydrate will be directed by Roderick Chambers. Roderick has extensive experience as a director, although he was most recently involved in an on-stage role at the Guild, appearing in the 2017 production of The Little Foxes as the long-suffering Horace Giddens.

The set design team, led by David Pointon, have captured the outdoor terrace of a Greek island villa (with a beautiful sea view). 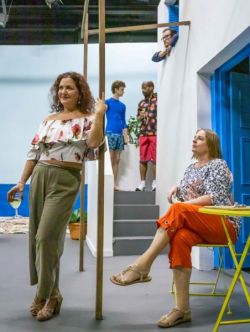 Liam Dowley and Vivien Wood are new to the Guild stage. In contrast, Guild Theatre veterans George Gleeson and Maria Micallef have previously performed in several plays; most recently George played the sinister role of Greg Sanderson in I’ll Be Back Before Midnight (2018) while Maria gave a portrayed Serafina Delle Rose in The Rose Tattoo (2017). Haki Crisden last appeared at The Guild Theatre as American tennis-fanatic Josh in the Guild’s production of Daylight Saving earlier this year and is eager to explore a very different character in Sufficient Carbohydrate.