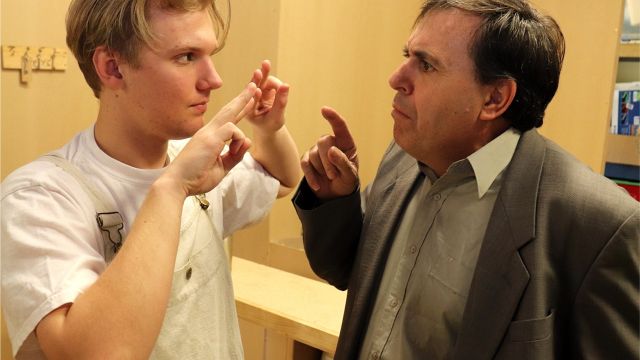 Picture someone who’s shy and doesn’t like to meet people – and then imagine how that disadvantage might be turned into a side-splitting comedy.

It’s all part of Serial Productions’ latest show The Foreigner, written by US playwright Larry Shue and directed by Rob Warner at the Old Mill Theatre from August 3 to 18, 2018.

Taking place in a fishing lodge in rural Georgia, Englishmen Froggy and Charlie arrive as guests – but Charlie is terribly shy, depressed about his wife’s illness and cannot find the words to reply to people.

“The guests take this explanation as fact and, as the play goes on, secrets are revealed to Charlie.

“Sometimes people do it on purpose and other times it’s because Charlie happens to listen in on plans by nasty people.

“It all culminates in a hilarious climax and heart-warming ending.” It’s second-time around for Warner who made his directing debut with the comedy at Marloo Theatre in 2016, picking up the Yvonne Lynch Breakthrough Award, David Crewes Award for best set and nominations for best director and best play, at the annual Finley Awards.

Joining Marloo Theatre in 1993, initially just to keep an eye on his kids, Warner has been involved ever since and has spent the past 12 years as president.

More recently, Warner directed Wife After Death for Serial Productions at the Old Mill Theatre and The Anniversary for Marloo Theatre.

“I enjoy doing comedy because I believe people want to go out and have a good laugh,” he said.

“With The Foreigner, the main challenge is ensuring that audiences believe a person who is so quiet can change so much by taking on a different personality. “It’s also one of the few modern comedies that remains true to human nature despite its absurd excesses.”