Wife After Death Comedy for Perth 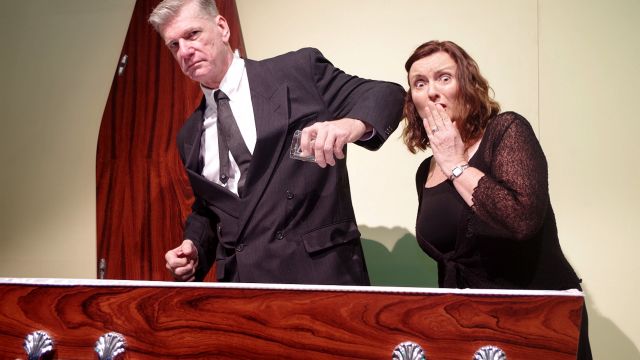 A SECRET life will soon be exposed at a funeral and the bombshell will cause tempers – and ashes – to fly.

It’s all part of Serial Productions’ latest show, Wife After Death, written by Eric Chappell and directed by Rob Warner at the Old Mill Theatre in August and September 2017.

Set at the funeral of successful television comedian Dave Thursby, his friends and family soon discover they know less about him than they imagined.

A series of revelations uncover some home truths while everyone tries to keep up appearances for the sake of his widow – and then an unexpected and unexplained mourner arrives.

Playwright Eric Chappell is an English comedy writer who wrote several of the UK's biggest sitcom hits during the 1970s, ’80s, and ’90s, including The Squirrels, Rising Damp, Only When I Laugh, The Bounder, Duty Free, Singles, Haggard and Home to Roost.

“I loved the script for Wife After Death and thought it was very clever and funny,” Warner said. “I also liked the fact it was a small cast and quite easy to stage.

“Having to build a set off-site is quite a challenge so it’s nice to have a relatively straight forward set to construct – in this case, it’s a drawing room.” Joining Marloo Theatre in 1993, initially just to keep an eye on his kids, Warner has been involved ever since and has spent the past 11 years as president.

Warner made his directing debut with The Foreigner at Marloo Theatre last year, picking up the Yvonne Lynch Breakthrough Award, David Crewes Award for best set and nominations for best director and best play, at the annual Finley Awards.

“As Wife After Death is a Serial Productions show, our challenge is finding a suitable rehearsal space – this year it’s our garage!” he said.

“Given the space may be slightly smaller or different to the Old Mill stage, it means the actors need to adapt quickly in the few rehearsals on the proper stage.

“The biggest task for a director is choosing the right cast and I can honestly say the actors in Wife After Death are absolutely perfect in their roles, which makes my job a whole lot easier.”