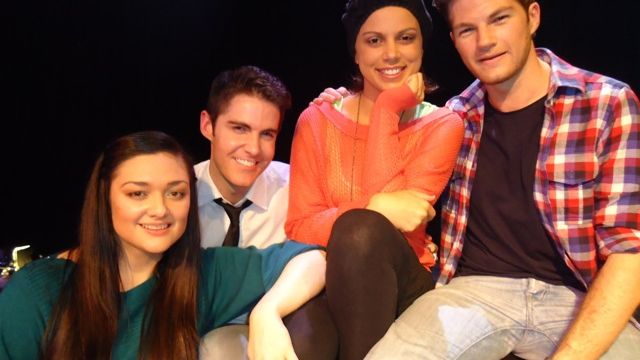 Already at this early stage of his career, the range, texture and contrast of his catalogue, as displayed in this revue, is diverse and exciting. There are emotional ballads, lively ensembles, engagingly connected duets and delicious comedy numbers, through a broad range of dramatic (and comedic) contexts.

There’s no book, per se, nor, thankfully, is there biographical banter, but the evening has the cohesive bond of a series of personal journeys.

Against a simple black setting, utilizing a couple of levels and staircases, director Neil Gooding’s production values are clean, effective and well-paced. The song placement and order is nicely balanced, and Nathan M. Wright’s choreography complements the songs well.

The cast recording, to be released shortly after the show, will certainly be worth watching out for. In particular, I can’t wait to hear the lively act one closer Kiss Kiss Bang Bang again.

Get along to Sidetrack Theatre for this highly enjoyable glimpse at the bright potential of Australian musical theatre.

Read more about the show and Matthew Robinson.