Arias on the Harbour 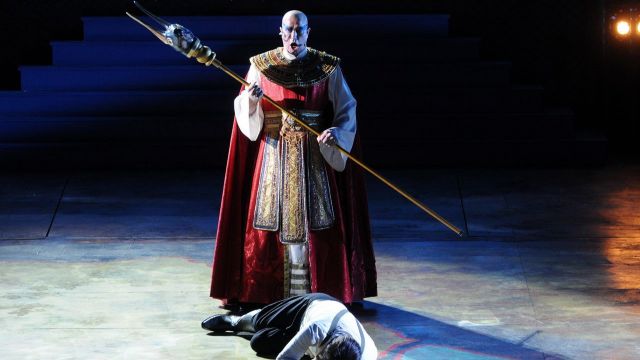 Steve Wimmer explores the audio challenges of staging grand opera on Sydney Harbour. This year’s challenge has been staging the epic Opera Aida.

At the forefront of the requirements for any successful Opera (besides the singers and the musicians of course) is the “sound” and “lighting”. This will make or break the production. After all, “hearing” the majestic music (by Verdi), with Brian Castles-Onion conducting, and the libretto (by Antonio Ghislanzoni) and “seeing” the production come to life (with Gale Edwards as Director and Mark Thompson as Designer) is at the core of any opera production.

Now, manage this in an alien venue like the foreshores of Sydney Harbour.

According to Sound Designer Tony David Cray, it is about making the sound as pure as possible, so as to ensure that the obvious limitations don’t result in a huge reduction in integrity. Use technology to compensate.

Whereas a “normal” production (in the Joan Sutherland Theatre in the Sydney Opera House) is typically raw, in HOSH it is, obviously, mic’d. Every singer, from principal to chorister, has not one, but two separately wired microphones – one is a back-up. Over 120 of them.

Each singer has the choice, if they wish, of radio receivers, in order to hear both the other singers and the orchestra. Most use them, but for those that don’t like to wear earpieces, or should one fail at just the wrong time, there are still the fold-back speakers on the stage. But where are they? There are no speakers visible. Fold-backs, plus all the normal speakers, are craftily hidden in various parts of the set, but in such a way that there is no vibration or sound distortion in any way. 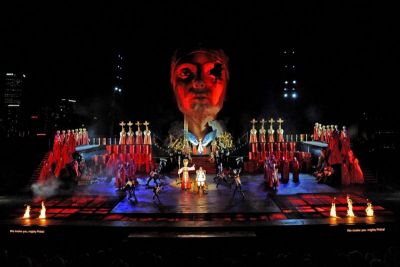 Unusually for a live performance, the orchestra is also mic’d. Hidden below the stage, the orchestra is completely cut-off from what is going on above them. I put to Tony that, therefore, what the audience is hearing is not the raw output from the musicians with the “mix” and “feel” directed by the conductor, but rather what the sound operators and mix controllers decide to output. Tony vehminently denies this, arguing that the cooperation and trust between the parties is extremely high. Conductor Brian Castle-Onion worked very closely with the sound engineers and operators; listened and commented on rehearsal tapes, time and time again, and between them they tweaked the output to make it as close to perfect as possible.

The real surprise is the 120-odd speakers placed under the seating. It’s a, sort of, “surround sound”. Imagine the difficulties of balancing a total of 250 separate speakers in such a way that the overall sound quality is as good for the $79 seats as for the $330 ones.

This was the first time in the four years of HOSH where under-seating speakers were used, and so there were unintended consequences. The cast, who are quartered in shipping containers under the seating, complained during rehearsal about the intensity of the sound from above, so last-minute changes and additions had to be made to reduce the problem.

Of course, according to Tony, it’s the rehearsal period which is so important. It’s rehearsal, rehearsal, rehearsal that gets the sound right. And even then it might take a few “live” performances to get it perfect. Once human bodies fill the seats, Tony concedes, on questioning, that on Opening Night some of the volume might have been a bit uneven, with a couple of the Principals being comparatively too loud and the orchestra being overwhelmed on occasion. But most productions, anywhere, need to settle in, and this one certainly has. 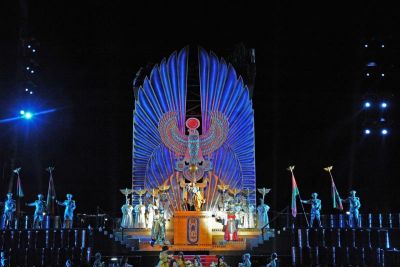 One problem, for which there is no real solution, is the lack of spatial differentiation. With a stage that is about 30 metres wide, and the same depth, a voice from stage left sounds like its coming from the same place as a voice from stage right. This must be very disconcerting for audience in prime seats who are used, in a traditional theatre, to clearly differentiating location through their ears, but will have very little effect on audience used to the rear of the theatre where differentiation is not possible anyway. It’s a pity, because, for example, (spoiler alert) when, in the final scene, Amneris is watching from high on the statue of Nefertiti, 18 metres up, her aria doesn’t sound like its coming from there!

Another, albeit minor problem, is the sound which is missed. In a traditional venue, un-mic’d, the sound of incoming foot soldiers would be heralded by the sound of the feet on the stage, having the effect of underlining the tempo of the orchestra and adding to the resonance of the moment. There is none of this obvious. And this is a pity. It’s as if they glide in on wings. Sure, the music and singing is clean and unencumbered (a plus), but the theatrical effect is reduced ( a minus).

As Tony admits, from a sound perspective, it’s a bit of a compromise. The general noise platform is high; constant opportunity for foreign sound to infiltrate without warning (a blast from a ferry, for example; the noise from slapping waves; undulating wind noise, etc), and needing to get the balance as good as possible across an audience seating plan which must be 90 metres wide.

Read about the lighting challenges of Aida in the May / June edition of Stage Whispers.