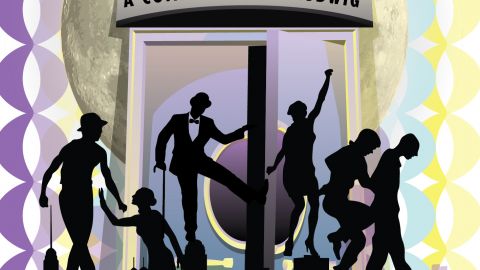 AUDITIONS WILL BE HELD ON SUNDAY MAY 29TH 4PM-6.30PM TUESDAY MAY 31ST 6.30PM-10PM AT ELTHAM PERFORMING ARTS CENTRE 1603 MAIN ROAD RESEARCH 3095 DIRECTED BY STEVE SAUL SYNOPSIS It is the summer of 1953, and George and Charlotte Hay, formerly a couple of Broadway stars, have taken their run-down touring company to Buffalo, New York. In Buffalo they have the intention of running “Cyrano de Bergerac” and “Private Lives” in repertory, all the while grumbling about missed Hollywood opportunities. But on-stage harmony is compromised when George performs an off-stage infidelity, impregnating the company’s ingenue. When Charlotte learns of this, she prepares to run away with the family lawyer, sending lightweight George on a grief-stricken drinking binge. It turns out that Frank Capra is headed to town on a talent scouting mission looking to hire the couple for his swashbuckling Scarlet Pimpernel epic. As a result, the Hay family -- including scornful, deaf mother in law Ethel, determinedly practical daughter Rosalind, and dashing actor Paul, Rosalind’s ex-boyfriend -- must work overtime to get sloppy drunk George into his Cyrano hat and nose…. or is it his Elyot Chase smoking jacket? With the entrance of Rosalind’s fiance, anxious TV weatherman Howard -- one man with two mistaken identities -- and Richard Maynard, the wealthy lawyer hoping to lure Charlotte away to his mansion -- the confusion only intensifies. With a plethora of pratfalls, slamming doors aplenty, and backstage shenanigans, Ken Ludwig’s Moon Over Buffalo is a fast-paced, hilarious screwball comedy in the old tradition, a throwback farce, a valentine to the stage, and the larger-than-life personalities that inhabit the world of the theatre. CAST George Hay M 40-60 A reknowned actor, at least by his own estimation. Now on the downward side of the career hill, he lives in hope of one last big break. But his human weaknesses may yet thwart his hopes. Charlotte Hay F 40-60 George's wife and long-time co-star similarly in slow career decline, hoping for that break but frustrated by George. Ethel F 60-80 George's mother-in-law. Almost completely deaf and with very little time for George. Rosalind (Roz) F 20-40 George and Charlotte's daughter. She has left the company and is visiting to show off her new boyfriend. She was once romantically attached to Paul and the shadows linger... Paul M 30-50 A member of the company and George's long-suffering assistant. This usually means boosting George's ego and clearing up his messes. Richard M 50-70 George's lawyer, smooth almost to the brink of sleazy, with more than a passing fondness for Charlotte. He thinks she can do better - namely, him. Eileen F 20-30 The company ingenue and a victim of George's charm... and his casting couch. Solving her 'problem' will have an effect on everybody. Howard M 20-30 Roz's boyfriend and a very excited fan of the Hays. When he tries to show how big a fan he is, chaos ensues. Note that age ranges are not set in stone. Relative ages of key character pairings are most important.