HOW LED LIGHTING SAVED PRISCILLA QUEEN OF THE DESERT. 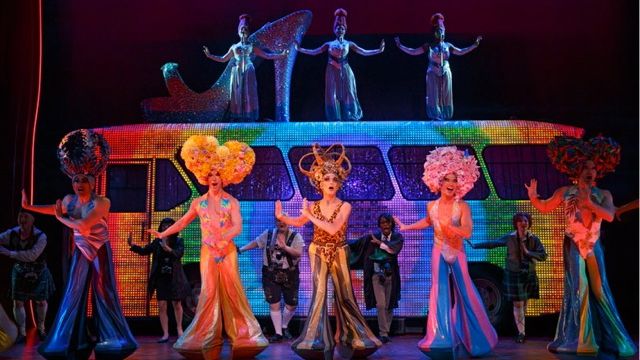 It’s Australia’s most successful musical theatre export, having been staged on Broadway, in the West End, Brazil, Italy and soon Sweden and Korea. But the size of the bus saw the production stalled. Producer Garry McQuinn explains what changes were made to make regional tours of the US and UK possible.

Everyone loved the big show but increasingly the people who wanted to do Priscilla could not afford it. If we had not solved it there would probably be no Priscillas apart from the large productions.

Priscilla is the bus. You can’t not have it. Those US regional markets would only accept a big bus. For a year there was an impasse, with me protective of what the bus was and how it would look, until I let our US partners take over.

Quite remarkably they manage to bump in Priscilla into a new venue in two days (compared to six weeks for the first production). There were some sacrifices. They sliced it up like a loaf of bread - with five slices. They come in their own pre-prepared crate with wheels. It is wheeled off a truck and onto the floor of a theatre. The whole thing is assembled in three or four hours maximum and plugged up. 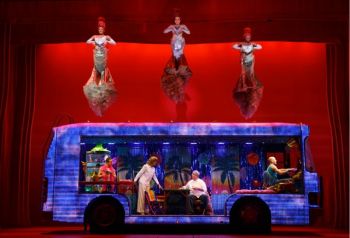 It does not have everything we had in the big bus. The shoe on top does not move. Some of the moving elements are less complicated.

The theatres in North America, by and large, are big theatres with great access from the road. You can generally roll off the back of a truck onto the stage.

But you could not do it in the UK where theatres sometimes have access as cramped as a double door, then you have to go downstairs in a lift.

(The solution was to build a bus which has an outline of the vehicle like a big coat hanger.)

LED screens are the windows. On the windows we have (moving) content of the passing Australian bush.

(The action on the windows starts in inner city Sydney, passes eyesores on Parramatta Road and enters the bush where a stylized Skippy the bush kangaroo gets a whipping.) 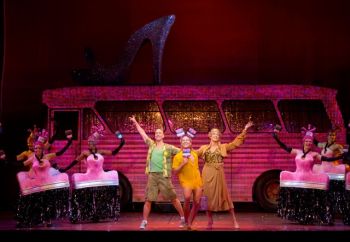 A terrific young Australian talent, Jamie Clennett, has put it together. I ring him up in the middle of the night and ask him to add a few extra seconds here or there to allow for adjustments.

The fact is you can do more with the choreography without that great silver house brick on stage, which literally sucks out the rest of the stage.

When the big bus is on stage, the performers may as well go off the stage and have a fag.

I prefer some of the scenes, as you see the dancers and chorus.

Now that we know it works I am about to commission a new bus, which uses fibre optics...to define the outline the bus.

Aside from that in a world major engineered theatre with mechanical complexity, every now and then you have to remind yourself you are telling a story about people. The production standards are a very nice picture frame. What they do is tell the story of Priscilla and I think the story holds up.

Where is Priscilla Going Next?

The UK tour bus will next go to Turkey. It will be part of an English speaking tour that will travel to places like Athens and Budapest.

The big bus went from London to Brazil to Sweden for a production in Swedish. The new improved bus will go on a regional Italian tour. Believe it or not, it is still running in Rome. Already we are the most successful musical Rome has ever had.

My aim over the next two years is bring Priscilla back to Australia. It’s not that far from the 10th anniversary. I got a big red flag. Get this show back to where it came from. That’s an exclusive for you!

Priscilla Animator Jamie Clennett explains how he put it together.

I studied Theatre Design at NIDA and the process is similar in that you are given a brief to follow.

The biggest challenge is matching the colour on the LED screens to the design. There is a lot of jiggery-pokery to get it right.

When I ever tested it on the bus, Brian Thompson the designer was there, and would say things like that is not the red I want. The red on the computer screen might be red but once it goes onto the bus it might be orange or purple.

You have to use high contrast images boiled down to its simplest forms. Anything with any high detail won’t read on the bus.

I use mostly Adobe Suite for the animation and Photoshop.

For the first West End production it took me three months to make less than 3 minutes of animation. So that is one minute per month.

It is time-consuming, but with animation you can do it in isolation - sit in a room by yourself. Whereas as a set designer you have to co-operate with many different disciplines.

Photos of the touring production by Joan Marcus. Animations by Jamie Clennett

Originally published in the May / June 2013 edition of Stage Whispers.