Lighting Up The Stage 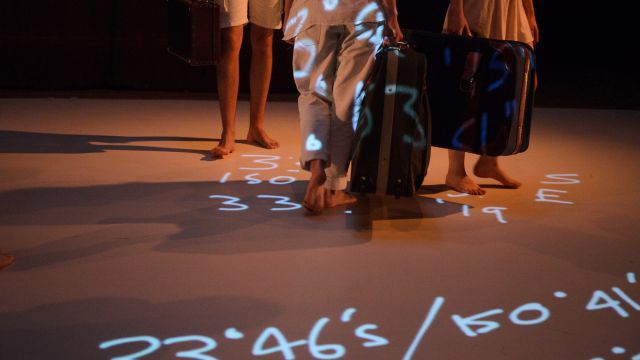 A show that invited the audience to navigate and traverse the terrain of our existence, Cartography looked at ideas of home, understanding and journey, the intimate exchanges and mapping that make us who we are.

The coordinates, which appeared as if they were being drawn in chalk across the whole space, were hand draw by the cast on the iPad and projected across all the surfaces. 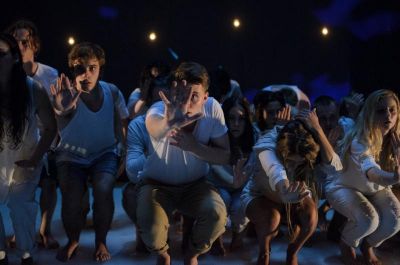 A black scrim was used along with the cyclorama as a projection surfaces, hanging light globes behind the scrim were used to create the effect of cast appearing and disappearing.

A central chandelier piece was created using 16 vintage style hanging globes, around the octagonal shaped centre bars. These were distributed across 4 dimmers to create fade effects.

The performance evoked atmospheric dimensions which the cast could move in between. This resulted in an audience experience that created a strong sense of reflection which provided a landscape for the rich and poetic dialogue to live inside of.

3 laptops running Qlab and network linked, provided the vision content and audio for this performance. One machine was the show master, with the other two receiving their cues from this over Ethernet. Lighting and vision designer: Matthew Osborne. Directed by Anthony Skuse and Samantha Chester. Devised by ACA 2016 Graduating Company. 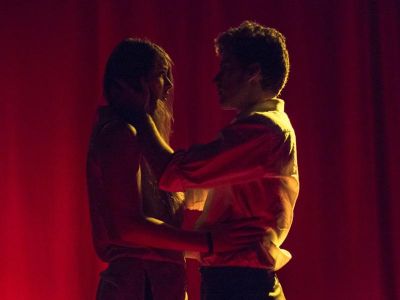 Production: Attempts on Her Life

What once seemed a solid back wall is opened to reveal a garage punk pussy riot-esque rock protest group “Putin and the Pussies” with full ‘Rock ‘n’ Roll’ show set up complete with a blinder wall.

The catch is that this set up is in keeping with the band’s genre status of ‘garage’; everything, though spectacular, is pieced together from found materials. The blinder wall was achieved through domestic festoon lighting looms, domestic globes and aluminium baking trays.

There were two circuits built into the baking tray blinder wall (top and bottom) to manufacture the feeling and movement of a larger scale light show by stepped chasing between the two circuits in both a synchronized and syncopated fashion.

The key aesthetic of a blinder wall in a ‘rock show’ is its uniform grid nature for bodies to stand out in silhouette against. This uniformity and spectacle of an arena show was an important feature to retain - coupled with a feeling of a no-budget homemade performance that could possibly be occurring in a garage, warehouse or other found space. The overall design for this production of Attempts on Her Life had the essence of an abandoned strip club, complete with raised T-junction catwalk. This abandoned nature asked for the use of older technologies like Strand S/64 battens, p743’s, manually operated Jands EVENT plus, manual followspots, home-made snow/glitter bag drop, rope lighting used under the raised catwalk in order for it to look like it was floating above the ground rather than sitting upon it, and a creaking mirror-ball constantly turning overhead.

Standard fixtures such as Pacific profiles, fresnels were used as the back-bone of the design with the aforementioned older technologies used as feature points peppered throughout.

Adelaide College of the Arts

The major themes (of the play) include epic theatre and film noir. A monolithic blackboard wall with a reflective floor was built by Adelaide College of the Arts set construction students. There were two hot-spotted acclaim Fresnels at 45 degrees up-lighting the downstage actors’ faces with Lee 156 Chocolate; this colour has a very strong muddy skin tone to create a heightened sense during songs.

Upstage actors were side-back-lit with Lee 132 Medium Blue for a surreal feeling while maintaining presence for performers. The harsh side angle of source is to minimise light bounce off the reflective floor, taking into account the angle of incidence to avoid spill into the audience.

In epic theatre convention, the colour red on the blackboard wall signifies corruption; placement of these fixtures was difficult as to not impact on any other acting space while still having enough intensity on the wall.

The calmness of blue on the cyclorama behind gives a strong contrast with the red wall, while connecting with the performers on stage. The cyclorama was lit from both above and ground rows, creating a gradient effect around the wall enhancing the monolithic black hole feeling.

Production:  Wolf in the River

Wolf in the River was performed in the round where the audience sits in a 360 degree circle around the stage. Normally lighting designers alter an audience’s perception by changing the direction and nature of the light, however it becomes more tricky when the audience is on all sides of the performance. For this production, third year NIDA Technical Theatre and Stage Management student Kirsty Walker needed to consider different aspects of lighting design such as how to light the performance for one side of the audience without blinding the other. To conquer this, the student carefully examined and considered the angle of more than 150 lighting instruments to find a compromise between artistic and practical demands of the production. She then used extensive geometry to calculate the impact of each lighting instrument. She then looked at the lighting system as a whole to best create the overall look and feel needed for each scene.

Another interesting lighting challenge was the need to create the illusion that a character was traversing a rope at a considerable height. The student discovered that the key to creating this sense of height was to light the subject without lighting the space above or below. This created the sense that the character was floating in space, which helps the audience suspend their disbelief. To achieve this, the student used side-lighting and low-angle lighting, so that the overspill of light that shoots past the character didn’t light anything (such as a wall or set item) until it was well outside the audience’s visual field.