NIDA Lights Up For Vivid 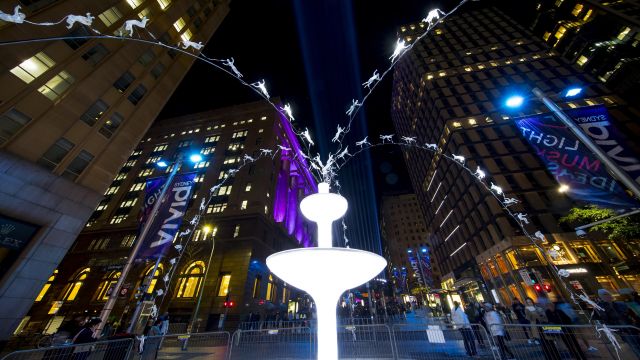 NIDA’s Bachelor of Fine Arts (Staging) students relish the hands-on practical nature of the course. Taylor Hill explains the challenge of putting together a light project for Vivid Sydney.

Second-year staging students were selected to help construct a light installation - the Fountain – a 3-metre high geometric mountain of light, which live-streamed the global birth rate. The data appeared as ‘human water droplets’ that emerge from the Fountain’s water jets, shoot skywards, float to the ground, land on their feet and then walk into the distance.

This announcement was met with huge excitement by all of us as Vivid Sydney is one of the festival highlights of the year.

We met to discuss materials, size, placement and budget of the installation, then drafted a construction process for the build, which had to be put together in just 14 hours.

The construction began with the building of the mould/shell of the fountain bowls. This included sectioning the bowls into one eighth parts, making the mould out of plywood and foam, duplicating the mould eight times, securing all pieces together with small nails to form the bowls, and then using builders bog and a sander to create a smooth finish. We then melted thin pieces of plastic over each of the bowl moulds, making it more durable for the sculpture’s final outside setting - Martin Place.

A company was engaged to make rolled steel, which we welded together to form the metal skeleton for the fountain. This skeleton held everything in place, including the ‘human water droplets’.

The build of the metal skeleton included welding and moulding the rolled steel into shapes to hold and connect the three fountain bowls. We also created long ark-shaped steel poles with spikes that were used to support the figurines.

Once each of the metal components was completed, all the different aspects of the fountain were constructed and de-constructed at NIDA to ensure everything fitted together before the bump-in at Martin Place. The final part of the build was the most challenging and rewarding, as a professional props caster was hired to teach us the process of making the miniature ‘human water droplets’. It included printing out 3D figures, and using modelling clay, Pinkysil (liquid that hardens to a rubber-like substance), plaster and acrylic resin to complete the look.

We made more than 300 moulds to produce the five perfect sets of 25 miniature figurines needed for the installation. Despite a few hiccups along the way, we managed to send off the last set of ‘human water droplets’ to the lighting company S1T2, who then applied the finishing touches of LED strips to the figures. For the final installation of the fountain at Martin Place, the LED strips were attached to a loom (a big long cable) which fed electrical current into the miniature figurines making them light up.

This was the most rewarding and challenging build we have done thus far. We were so pleased with the outcome and feel very proud to have been chosen to participate in one of Sydney’s favourite festivals, Vivid Sydney.