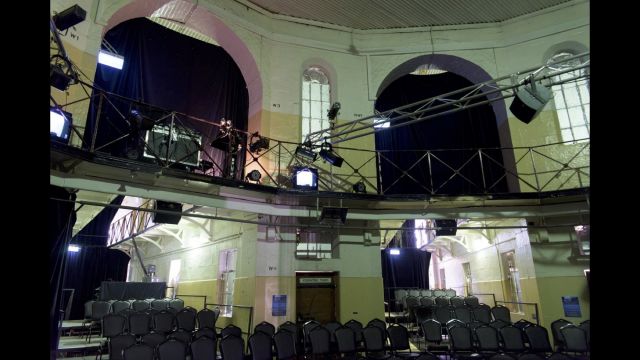 Greg Ginger from Outlook Communications volunteered for some hard labour in the main cell-block of the old Castlemaine Gaol, built in 1861. It was the setting for Stephen Sondheim’s Assassins,  staged by Three’s A Crowd Inc.

When Director Matt Sheehan approached me with the idea of using the gaol for the production I knew we were in for a challenge.  The reverberation in this concrete and stone building was an audio nightmare for musical theatre performances. The more amplified and complex the sound signals, the more difficult they are for the audience to understand.

The company wanted to integrate the architectural features of the historic building as the set, which was dramatically exciting for a production about killers. 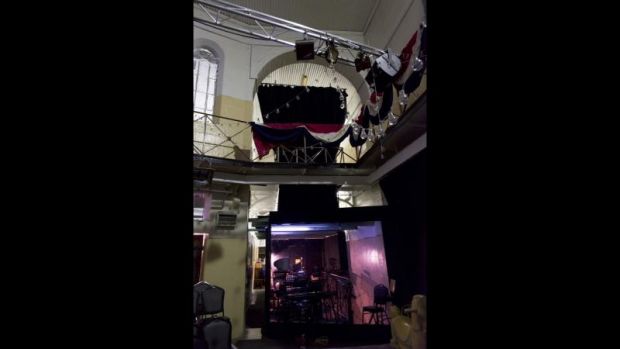 The atrium where the stage was situated had a 10m corrugated iron ceiling. The performance area was in an open corridor, which joins three cell-blocks together. A stage was built for the cast of 19 and seating for 150 people.

To make this production work we created an isolated band room for the 12-piece orchestra, with carpet and exhibition partitions for walls and ceiling, with a large window into the space so the audience could still see them.

Drapes  were run along the back of the stage up to 4 metres high and wrapped behind the audience. More drapes were hung upstairs in the cell block arches, from the ceiling down to 4 metres above the floor. Behind the seating banks, the drapes ran the full 8m height. Tiered seating on carpet covered risers was used to improve sightlines while reducing the reflections from the concrete floor.

This treatment reduced the reverberation from around 5 seconds to about 1.8 seconds. This was enough to provide clarity of vocals and orchestral articulation via a distributed sound system to the audience.

The amplified sound was collected by 16 Sennheiser radio mics and 14 microphones in the orchestra, to provide a light reinforcement to the live vocals in the space and control of the orchestral balance to the entire audience. This would not have been possible without the acoustic separation. Sound design is so important when staging musicals. The audience engagement with the show can be lost if words are difficult to understand and acoustic anomalies in the performance venue are left untreated. Just adding more speakers and making it louder is not enough and sometimes makes it worse.

Overall the design achieved all its objectives. The sound was well controlled and the audience experience was excellent. The Bendigo Advertiser described the setting as “eerie and perfect” for Assassins.