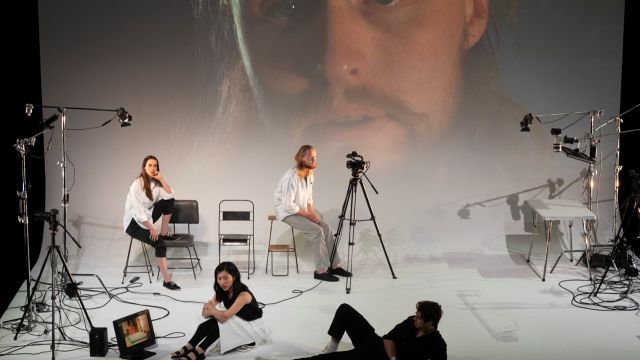 Wun Zee was lighting designer of pool (no water), written by Mark Ravenhill and directed by Ben Schostackowski, in the NIDA Playhouse Theatre as part of the 2019 June NIDA production season. She explains the lighting design in the pictured scene.

What is happening in the scene?

The characters have just found out that their friend who had been in a terrible accident had recovered and they're feeling a mix of guilt and disappointment that she is better. They are considering what it means for them individually and the work they have done photographing her recovery, while she had been unconscious.

What was your artistic aim in lighting this scene?

The aim in this scene was to create a stark atmosphere, as they had just arrived here from a place of excitement, and the feeling of having a rug being pulled out from under them. It was also important to express how they were now back in reality after having experienced an almost dreamlike situation. And of course having to light each of the characters to make them clear and distinct in the live recordings.

How was it achieved?

The use of cool white light on the set had helped bring starkness, almost as if they were in a hospital waiting room. Along with sidelights, the use of the film lights on stage as part of the props has really allowed for the characters to be separated in their own world that was created with the use of a floating set. The use of the dedos on stage also provided a more flexible use of lighting that could be easily manipulated by the cast members on stage to create the shots, that not only lends itself to their characters as artists but also to be able to light small details that would otherwise have been very difficult with traditional theatre lighting. 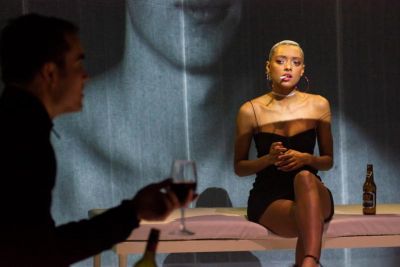 Do you think it was successful?

I think that all the different elements of this production including (but not limited to) the set, sound, video, props and lighting melded together successfully to create and maintain the world that these characters exist in. In terms of lighting, I think the use of practical film lights on stage was really successful in lighting the characters, especially in intimate moments, and really helped capture the emotions that these characters were feeling.

How important is lighting in setting the mood of a production?

I think that lighting definitely helps in creating the mood of a production, but in this particular production lighting was only part of it. The use of sound and video was also very important and the combination of the three allowed this production to be told in an engaging way.