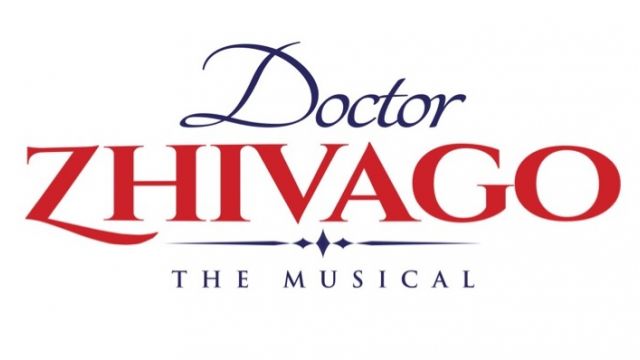 Available for licensing for musical societies.

Based on the smash DreamWorks animated motion picture, Madagascar: A Musical Adventure JRfollows all of your favourite crack-a-lackin’ friends as they escape from their home in New York’s Central Park Zoo and find themselves on an unexpected journey to the madcap world of King Julien’s Madagascar.

Your favourite practically perfect nanny takes centre stage in this Supercalifragilisticexpialidocious adventure based on the award-winning Broadway musical and classic Walt Disney film. 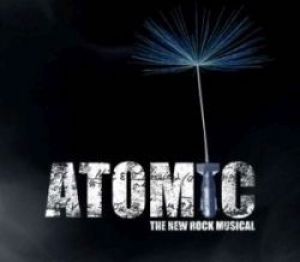 Synopsis:Most people know about the atom bombs that ended WWII. However, the story of the scientists that created those bombs is a gripping tale of hope and fear that still remains largely untold. Staged in Sydney, New York and regional US.

Dance like you’ve never danced before! Flashdance the Musical tells the story of 18 year old Alex, a welder by day and ‘flashdancer’ by night, who dreams of going to the prestigious Shipley Dance Academy and becoming a professional dancer. When a romance complicates her ambitions, she harnesses it to drive her dream.

Based on the Paramount Pictures film. 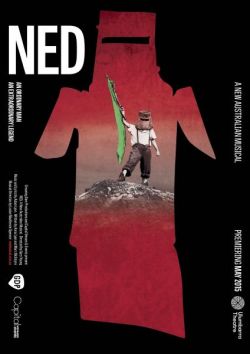 NED explores the extraordinary highs and devastating lows of Ned Kelly’s journey from local hero to felon to legend. Audiences will see themselves in the struggle of a poor family trying to make it through in a system that was stacked against them.

Adam Lyon (King Kong) has written a hauntingly beautiful score that captures the sounds of the bush and Irish ballads, while the libretto has all the raucous humour, warmth and tragedy audiences expect from this iconic story. NED is a truly Australian theatrical experience.

"Quite simply the best entirely Australian musical ever." Stage Whispers

See video, listen to music and read the script at 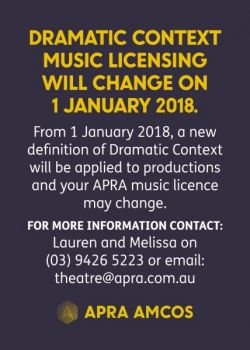 From 2018, the definition of a dramatic context performance has been widened to simply comprise the performance of musical works in conjunction with a live stage production that has a storyline, one or more narrators or characters or as a ballet.

Previously dramatic context fees were only charged if there was music on stage and theatrical effects such as costumes and dialogue.

APRA says the changes are good news for schools and community theatres with modest budgets as under the changes they will be able to quickly licence works without having to refer back to the copyright owners of the music.

For producers of tribute shows who did not previously need dramatic context permission the news is not so good as they face more hurdles in getting permission.

However, APRA says these producers now have more latitude to change production elements during their rehearsal periods without having to refer back to copyright owners.