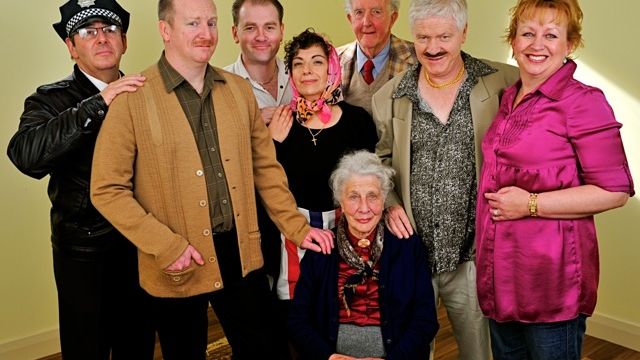 Everyone is getting older and becoming your parent’s parents is never easy. The onset of Alzheimer’s just sweetens the pot. I am still lucky enough to have both my parents – Dad is 92 and Mum is 84 and they continue to enjoy life. But for an ageing Australia the issue of living longer is a reality we must all deal with. As the Baby Boomers head for retirement, they are moving from being the Arthur Beares to becoming the Maggie Beares. Frightening thought for us all! But with good humour and plenty of patience, age, like all other of life’s achievements, should be accepted and celebrated.

Geoffrey Atherden was smart enough to realize this when he wrote the iconic sitcom Mother & Son. We watched in delight and horror as Maggie drove Arthur crazy with her scheming, grandstanding, manipulating and ultimately loving relationship with her loyal divorced son. We watched dentist brother Robbie’s attention grabbing antics with disgust but were glad we weren’t Arthur. Discovering some of the scripts were available for live performance was a delight. Being able to work with Isabella Norton and Kim Clark has been a joy. The thing I love most about this show is we get to play Australians and tell Australian stories. So for all the Mothers & Sons in the audience, don’t laugh too loudly, one day this could be you …

There’s been a trend in recent years to stage British sitcoms, with shows like While The Cat’s Away,inspired by George & Mildred, Are You Being Served, and of course now a very high profile production of Yes, Prime Ministerunderway.

But what about Australian TV sitcoms? I was delighted to discover that Geoffrey Atherden had made some of his superb scripts available from Mother & Son, for live performance.

This evening of Mother & Sonpresents four of the best scripts, that very nicely complement each other: The Neighbours, which looks at Maggie’s ongoing battle with her New Australian arrivals; The Boyfriend,which sees her find a new beau in Lionel; The Will, where she decides to leave a possible fortune to Arthur; and The Oysters, where she attempts to shoplift back Arthur’s affection.

We worked with the actual TV scripts, which have lost none of their power, poignancy or precision, and they’re still very funny.

Why I chose this play.

I love Australian work, yet see too little of it staged. I like to showcase our stories. Here were classic Australian characters dealing with a very relevant topic: ageing and raging against the dying of the light, especially in Maggie’s case. It’s funny, it’s happening and we have to learn to deal with it. The humour hasn’t aged a second.

Normally I hold auditions, as I love working with new talent, but this time I knew who I wanted so I just picked up the phone. I only had one choice for Maggie. Isabella Norton swept every award in Adelaide for her indelible performance as Daisy Werthan in Driving Miss Daisy in 2009. At 85 she was perfect for Maggie Beare and still as sharp as a tack. I have always been a Henri Szeps fan and the chance to play Robbie Beare was irresistible. Kim York is an excellent character actress and was ideal for Liz, and I was able to call on a range of terrific characters to play the other parts.

I like to keep sets simple, so we went with a box set and made the kitchen table the focus of the action. Holden Street is a truly intimate theatre, with raked seating, which puts the audience right in the kitchen with the characters. We had a real fridge, gas oven, kitchen sink and even a toaster that popped out real toast for Arthur. We had to create different locations, so converted one side of the lounge room into a dentist’s surgery and the other side into the local police station during Act II. It’s a wide stage so everything fitted well.

I always have eight weeks for a play and 14 for a musical, so we rehearsed three times a week in a church hall where we had plenty of space to match the Holden Street stage. Maggie and Arthur carry the bulk of the show, so we rehearsed the show in episodes and only called the supporting cast when they were required. Issy knew her lines when the rehearsal period began, as she had been working on them for months and it really helped her confidence at 85 years young to be playing such a major role. Rehearsals were like Sunday nights when my family used to get together every week, relaxed, fun and lots of news and love.

Our lighting and sound techie had to create the Beare household but then add different areas like the dentist’s surgery and the police station, and even a beachside cliff top, complete with atmospheric seagulls and waves. We used some nice linking music to cover the change and the transition between episodes, and the audience loved it so much they often clapped and sang along.

Costumes
The experienced cast managed to costume themselves. As it was 80s Melbourne it wasn’t a huge stretch. But Issy had a lot of fun finding some old gems for Maggie to wear and hats and coats aplenty were all auditioned. My contribution was a brown felt hat from the Salvos for $5 that looked straight out of Maggie’s TV wardrobe. Once I found it a year ago I knew I had to do the show. She wore it with pride and devious distinction.

Holden Street Theatres is a former church hall that has been redeveloped into Adelaide’s finest intimate theatre. Plenty of mature theatergoers caught Mother & Son, but next February/March, Holden Street will be packed with Adelaide Fringe goers.

Summary
I’m a strong believer that theatre is a family and working with this cast and crew has been a true joy from the first read through to the final night. There has been a genuine camaraderie, love and appreciation by all members of each other’s contribution. Audiences loved the show as much as we did and it’s a guilty pleasure to go on stage very night knowing you’re part of something superbly Australian and you’re bringing them something they love. We have to tell our stories and Geoffrey Atherden has done that so memorably … for all our Mothers and Sons.