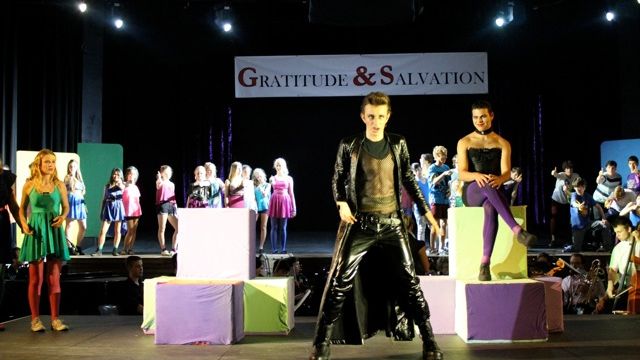 Melvyn Morrow, the co-writer of Dusty and SHOUT! and veteran Gilbert and Sullivan updater for both Opera Australia and Simon Gallaher, goes back to his old school for an all new G& S romp.

When my old school, St Aloysius’ College, Milson’s Point, Sydney, approached me to direct The Mikado, I wasn’t remotely interested in a traditional production, and nor, I gathered, were the students. I think that after a century and a quarter, much of the topicality of G & S has faded. Gilbert himself updated his Little List song, so I suggested an entirely new take on the original. Keeping the premise of the original plot, I offered to totally rewrite the libretto, setting my new version on Titipu Beach in Queensland during Schoolies. The conceit would be that Australia has been taken over by a bizarre right wing leader who revels in frightful fantasies of the punishment fitting the crime as well as a determination to stop all teenage nookie. The music would be sung strictly as Sullivan wrote it – well, with some crazy contemporary dance sequences between verses – and the new show would be called The BIG MAKado or Three Little Maids From Schoolies. 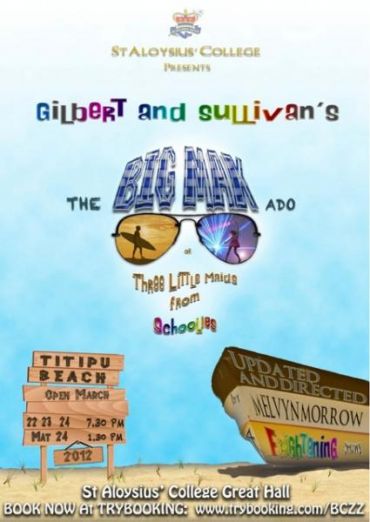 Auditions were heavy going, especially on our two highly gifted accompanists who had to play almost every audition piece without the dots. Some of the girls were adequately prepared; most of the boys weren’t. One girl essayed Send In The Clowns, surely a ludicrous choice for a fifteen year old. A couple of boys brought in CD’s and sang along with them. Sort of. Nonetheless, we found a fine Nanki-Poo, a terrific Big Mak, a superb male Frank-N-Furter Katisha, a gifted Ko-Ko, a delightful Yum-Yum, five other pert little maids (I added Sa-Ki, Su-Shi and Ding-Dong to the original three) and twins to play Pish-Tush and Tush-Pish. Add to this a local Police Chief, Go-To, and we had our principals. We also found one quite sensational Year 5 dancer/gymnast. Hip hop was the principal dance language, so the brilliant Head of Music, wrote witty dance breaks for our rappers and hoppers to hoof.

More and more these days, community theatre and schools are employing professional directors, choreographers and designers for musicals, and the resultant efficiency and edge repays the cost on every front. Choreographer Pamela French works wonders with dancing talent and miracles with un-talent. NIDA graduate designer Claire Moloney accepted the brief to make a set and costume budget of $2,000 look like twice that and more. We worked on drama boxes as modules with different colours in each act. To make the St Aloysius’ College Great Hall (read basketball court with wingless and flyless stage at one end) more audience and music theatre friendly, I decided to wrap the 24 piece orchestra (including a rock band) in a passarelle with a large thrust stage in front. 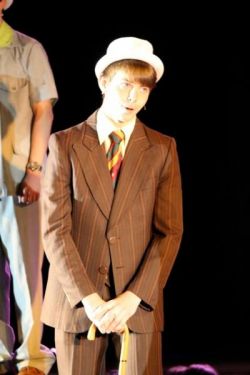 By far the greatest challenge was to the already busy Music Department staff, who were accustomed to ready-made musicals with libretto and scores tried, tested and written in concrete. Our work in progress meant a sentence of hard labour for the Head of Music who had to transcribe my new lyrics into the original score. There was a similar nightmare for the Musical Director who had to constantly jump from original orchestral score to my new one, which included comic encores, not to mention cuts and sudden breaks in the music for book jokes. The cast were fine with rewrites right up to opening night, but the pressure on the music creatives was wearing. It was a steep learning curve for all of us, but a resilient first time producer and a serene rehearsal pianist squared the circle and poured oil on troubled waters. It reminded me of Dusty rehearsals in Melbourne with a similar, albeit louder, creative conversation!

These days, all schools are busy beyond belief. With so many gifted students keen to involve themselves in so many co-curricular activities, bilocation seems to be a necessity for any talented student since much of the school’s really valuable education starts at 3.30pm.

We had one and a half hours of a Tuesday and then Sunday from 1 – 5, but illness (most of which I questioned), ‘family events’ (a universal get-out which is gloriously flexible but, alas, unchallengeable) and the girls’ quite correct first priority to their own schools’ weekend events meant that we never had a full ensemble rehearsal until the dress. That’s just the way it is. 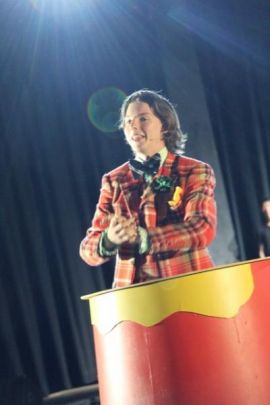 Our tenor had lost his voice from a music camp in the previous holidays, our four Year 12’s had HSC trials looming, one principal girl was genuinely ill and for good measure, our designer had to twice drive up from and back to Wagga where she was lecturing at Charles Sturt University. All part of the fun. The arrival of the hired passarelle and apron stage lifted everyone’s spirits and foregrounded the dialogue and the choreography. The orchestra combined increasing command with heroic patience. There were spirited exchanges about tempi (I was right!) and far, far too many encores (I was wrong!). I’d also made a major mistake in allowing an already overlong original to become even longer. Our fledgling producer tap-danced on eggshells and sprinkled company and creatives with crisp decisions and the fairy dust of optimism. He’d also wisely insisted on a free midweek evening during production week for everyone to recuperate. Shrewd move. Sound was excellent. Lighting was feeling its way, mostly in the dark. Bookings were great, and there was a witty puff in the Herald Diary, so excitement mounted. Scene changes were all over the place, usually the wrong one. And I learnt a new rule in school productions: apparently stage crew may never be shouted at. Poor loves.

We were lucky. Actually, no we weren’t; the cast, crew and orchestra rose to the challenge. The dress rehearsal was ludicrously long but promising nonetheless. The first performance was goodish. The second performance was a hit. The third performance, a matinee, was OK, though in retrospect, I’d never again do two school performances in one day; the cast’s singing voices are simply not up to it. And in the last performance, the actors were much better than the audience. That said, audiences absolutely lapped up this new, irreverent version of The Mikado and cheered the performers to the basketball hoops. It seemed that the younger or older the audience members, the more they loved the satiric naughtiness of the take. A conservative few were outraged, which the company and librettist/director took as accolades.

… as a footnote, after four performances, I’ve now been able to savagely edit The BIG MAKado to a two hour Gilbert and Sullivan romp for adventurous school producers.

Originally published in the July / August 2012 edition of Stage Whispers.